It rained quite heavily overnight and the red dirt in the camping area was looking a bit messy.  The skies were looking quite overcast so we decided somewhat reluctantly that we should find somewhere else to stay for the next few nights rather than stay on (or maybe in) red mud.  Ann made some calls and was able to find us a site (the last one apparently) and the Warrego Riverside Tourist Park in Cunnamulla (thanks for the suggestion Wendy).

There was constant drizzle as I did a quick pack-up of Bertha and filled the water tank and emptied the black water tank.  We said our farewells to Wyandra and headed back down the Mitchell Highway to Cunnamulla. 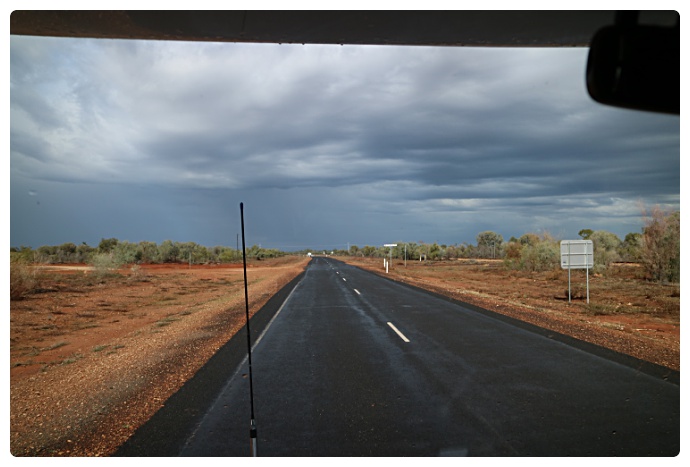 The rain appears to have had a strange effect on the wildlife around Wyandra, and for the first 30 or 40 kilometres out of the town we had to drive though a veritable slalom course dodging dead animals on the road.  Mostly kangaroos but other unidentifiable bits and pieces as well.

Slalom course on the Mitchell Highway

As if that wasn’t enough, we had an emu run right out in front of us, obviously planning on conducting “suicide by Bertha”.  It didn’t work though and he (or she) was able to join other emus on the roadside.  We also came across kangaroos and sheep on the road, also apparently intent on committing suicide, but failing.  I’m glad that Bertha has a solid bull-bar though. 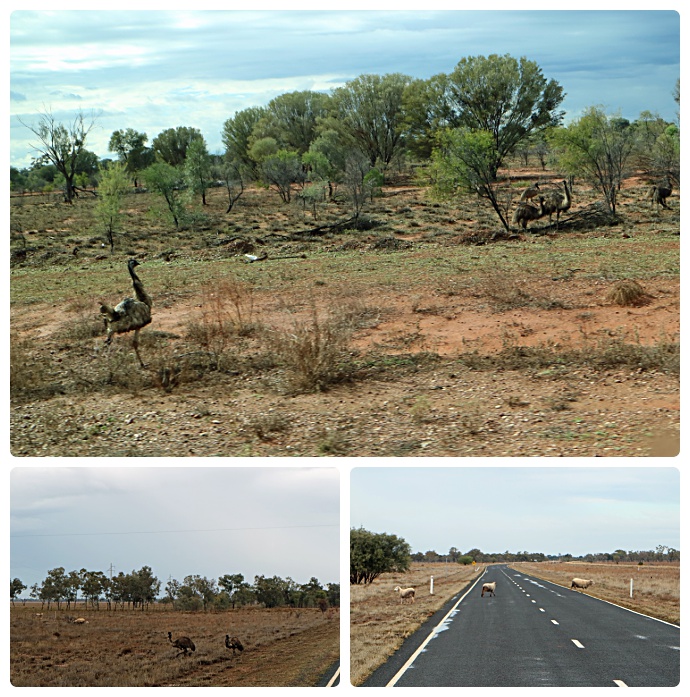 We had pretty constant drizzle most of the way to Cunnamulla but the skies cleared to blue the closer we got to town.  Some of the cloud patterns were quite spectacular.  It looks as though we may have escaped any further precipitation today (fingers crossed).

We arrived unbloodied in Cunnamulla at 12.20pm, only to find the town closed.  Practically all the shops shut at 12.00pm, but we did find a small IGA with extended shopping hours to 12.30pm, so Ann was able to restock some supplies – no bread or milk though.  Fortunately Cellarbrations was also open so we were able to restock those supplies as well. 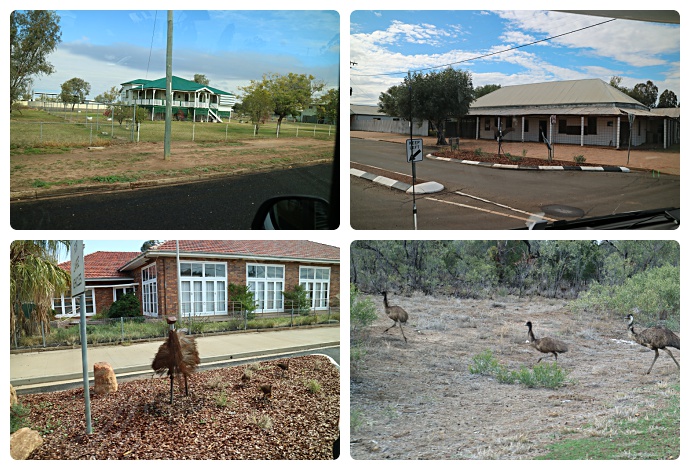 Some views of Cunnamulla

Upon nearing the Warrego Riverside Tourist Park we both realized that we had actually stayed here in 2014 – both of us had completely forgotten that we had stayed in Cunnamulla at all.  This is a very nice park – it was still quite bare 3 years ago but now all the shrubs and trees have grown and it is a very inviting place to stay.  There are plenty of green areas; the sites are all gravel; and the amenities and other facilities are great.

After setting up Bertha, Ann whipped up a delicious lunch and we settled down for a rest before we will go along to Happy Hour in the Camp Kitchen.