Another gorgeous day.  We were both feeling a lot more stiff and sore than we had anticipated, so we again took things quite easy today.

Although we regularly walk the distance we did yesterday at Uluru and Kata Tjuta, it isn’t usually on gravel, stones and boulders.  If anyone is contemplating the walks, we strongly suggest that you wear good quality hiking boots, preferably with ankle support.  Sneakers or runners just aren’t really good enough for the terrain.

After doing a few chores around Bertha and having lunch in the sun, we caught the shuttle bus to the Desert Gardens Hotel for a look around.

Our actual destination was the Wintjiri Arts & Museum area.  This is a new Indigenous art gallery that exhibits the works of various “Artists in Residence”.  The retail area showcases local indigenous products including weapons, tools, clothing with local designs, quilting material packs, books and souvenirs, and so on.  The most interesting aspect of Wintijiri however is the information about the local area, history, inhabitants, wildlife, and so on.  There were a number of displays of native flora, fauna and bugs with taxidermy specimens, which was fascinating.  Unfortunately photographs are prohibited.

From Wintijiri we walked through the resort to the Town Centre and did some shopping at the IGA supermarket before catching the shuttle bus back to the Campground.

Before long it was time to get changed as we were excited to be going to the “Field of Light” art installation at Uluru.  This was one of our “Bucket List” must-do items.

The tour bus collected us near the Campground entrance 30 minutes before sunset and took us to a “secret location”.  After a short walk to the crest of a sand hill, we were greeted with formally attired waiters and waitresses who served us champagne and a variety of canapes with distinctly outback flavours, including beetroot, crocodile, prawns and kangaroo.

Enjoying the Field of Light

From our vantage point overlooking Uluru, as the sky darkened we could see lights coming on along pathways, and then a huge area lit up in different colours.  The “Field of Light” is an art piece by UK artist Bruce Munro who has done 17 of these mass installations across the globe.  This is the first to be solar powered and the biggest installation to date.  There are 50,000 individual blown glass globes, covering 49,000 square metres.  The globes, which are on different height stalks, are connected by 380 kilometres of fibre optic cable to 36 portable solar panels.  The artist, Bruce Munro, happened to be at Uluru tonight, although we didn’t recognise him in the dark.  We were allowed to wander freely along the paths through the globes for a considerable period of time. 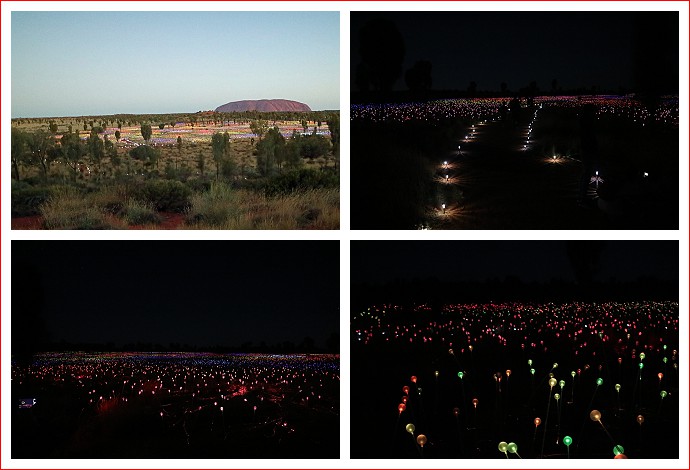 SENSATIONAL !!  That really is the only word to describe it.  My photos totally fail to capture the impact of this place, but hopefully provide some sort of indication as to the experience we felt.  There are a variety of different tours from the resort to see the “Field of Light” including a full gourmet dinner.

If you are coming to Uluru in the next 12 months or so, do yourself a favour and make sure to visit the “Field of Light”.

Eventually the bus collected us and dropped us off at the Campground where we happily walked back to Bertha and settled in to watch Q&A on TV.

We decided to have a quiet non-driving day today.

It was beautiful weather again today, and it felt a bit hotter than we have felt so far.

After a leisurely start we enjoyed a cup of plunger coffee in the sun with our books, on the benches behind our parking spot.

Looking out our backdoor

It was then time to do some more exploring of the Ayres Rock Resort, which is a lot more than just a Camping Ground.

We were starting to feel a bit hungry so we caught the shuttle bus to The Town Square where we had a delicious lunch at Gecko’s Café.  Other eating options at the Town Square include the Ayres Wok Noodle Bar (clever name) and the Kaluta Academy Café where we had coffee yesterday.  The Town Square also has a range of speciality and gift shops, a newsagent, a post office, an ANZ bank, an IGA supermarket and a large tourist information and tour booking centre.

After browsing the Town Square we then caught the shuttle bus back to Bertha.  It was quite hot by now and there were a zillion flies so we put the cooler on and caught up with a bit more reading inside, without the flies.

At close to 6.00 pm we headed off, with plenty of Bushman’s spray, to the Naninga Lookout to catch the sunset over Uluru.  There were quite a few other people there to watch the sunset including one young couple who obviously decided to make a night of it and bought up chairs, wine glasses and wine, and a roast chicken to enjoy. 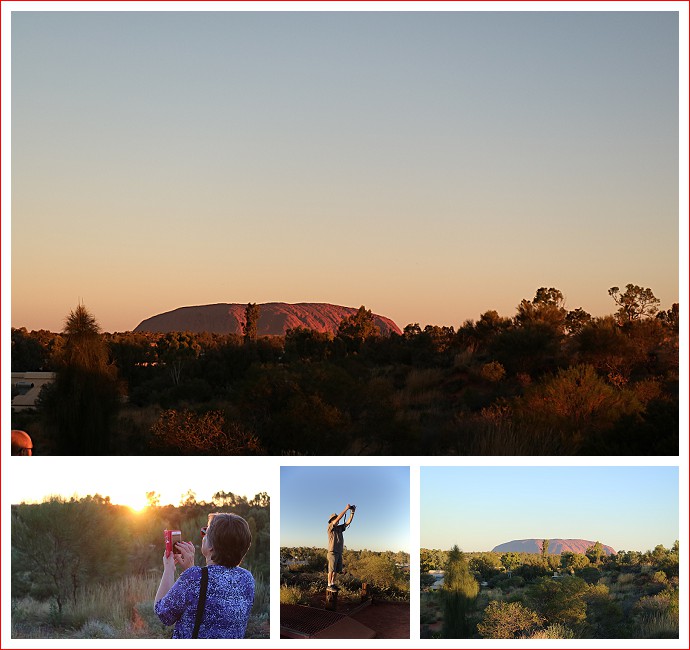 Views of Sunset from the lookout

Then it was back to Bertha for a spot of TV before having an early night.  We have a big day planned tomorrow!

We woke to – you guessed it – another beautiful morning.  A little chilly to start but by 9.00 am there was already a bit of a bite in the sun.

From Erldunda we headed west on the Lasseter Highway.

One of the first things we noticed were the multi-lingual road signs along the highway.  We had only seen a few such signs previously in our travels and we assume that there must be more international visitors flying into Alice Springs and renting cars to drive down to Uluru than coming up from the south where we have come from.

Our first stop was going to be at Mount Ebeneza Roadhouse (65 Camps 9) as we thought that this might be an alternative destination on our way back to the Stuart Highway from Uluru.  As there were two tourist buses there when we passed and the parking area was smaller than we expected, we had as close a look as we could but didn’t stop.  There was a flat area out the back which appeared to be the caravan park, and according to Camps 9 there are facilities needed for an overnight stop.

We drove on to the Kernot Range Rest Area (66 Camps 9) where we parked in the shade and had a cup of coffee.  There is a sign that advises that 24 hour camping here is allowable.  Some German tourists were already there filling up water bottles from the water tank, which was labelled as suitable for drinking.  A young chap came over and asked what we thought about the drinkability of the water, and we suggested that it should be OK but that we would boil it first.  He was happy with that answer and said that they did have some other water and that they would boil what they had collected here.

From Kernot Range we then drove on to the Mt Connor Lookout (69 Camps 9).  This offers a spectacular view of Mt Connor, which we are sure is often mistaken for Uluru.  I climbed to the top of the fine red dust sand-dune across the road for some more spectacular views of the Lake Amadeus salt flats.  This was the first time that the flies became a real nuisance so it was out with the Bushman’s spray and subsequently a lot fewer flies.

Back in Bertha after photos, we continued to Curtain Springs Wayside Inn & Cattle Station (70 Camps 9) which is about 84 kilometres from Uluru.  They have limited powered caravan sites here but there is a very basic shower block and there is a toilet block.  Unpowered camping is free but there is a charge for power or showers.  We had a look at the café but $16 for a basic hamburger was a bit too pricey for us.  Diesel cost $1.85 per litre which we also passed on.  As we hadn’t been able to access any fresh water since Coober Pedy, we took the opportunity to top up the water tank from a jerry can that we had filled from the bowser at Coober Pedy.  We lunched in Bertha before continuing along the highway.

Although there were plenty of road signs warning about wandering livestock, it wasn’t until we were getting closer to Uluru that we actually saw a few head of cattle along the roadside.  We also saw a couple of dead cattle by the road and wondered how you would move a carcass to the side of the road if you hit something.  Whatever – we’re glad that we have a bull-bar on Bertha. 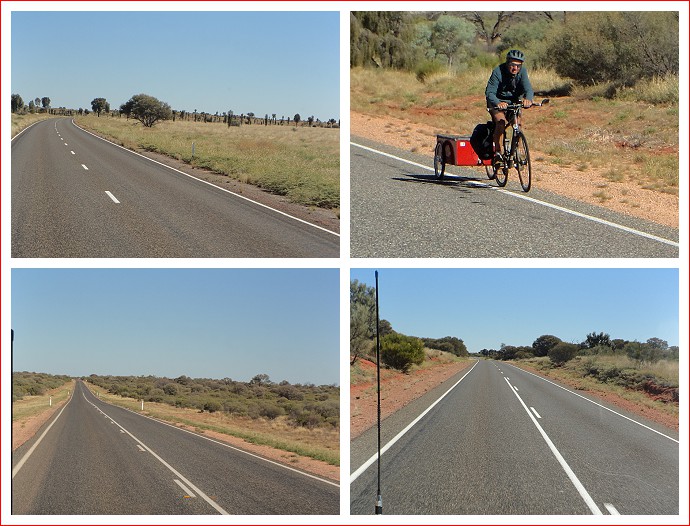 Scenes along the highway

We drove past Sandy Way Rest Area (71 Camps 9) which is 28 kilometres east of Yulara and the last place to legally camp before arriving at Uluru.  Very basic with no facilities and no shade or protection but it does have mobile reception.  This place might be a good option to stop overnight and get into Yulara early next morning.

As we got closer to our destination we found “tantalising glimpses” of both Uluru and Kata Tjuta (the Olgas).

Before arriving at the Ayres Rock Resort Campground, we had an important detour to make – to the Yulara dump point.  We don’t usually mention this subject but followers of our blog who may be following in our footsteps (wheel-tracks?) at some stage need to know that none of the roadhouses we have visited in the last several days have dump point facilities, so finding a dump point takes on a certain priority.  When we arrived there was a queue of SUVs waiting to use the facility, which doesn’t often happen.  This is a very different dump point and comprises a grate in the middle of a concrete driveway, covered by a removable metal plate.  It’s quite a different experience but there is a tap with a hose and a hand-basin to wash up afterwards – it all works!

From the dump point it was only a few kilometres to the Ayres Rock Resort Campground reception.  Ann had booked ahead which was just as well as she had booked a site suitable for a vehicle longer than 7 metres, and there weren’t any others available when we arrived.  This was causing some problems for those ‘vanners who though that they would just rock up and take their chances.  We have a great site with power, fresh water, and sullage; close to amenities and with a BBQ within 5 metres of Bertha.  How good is that?  And because we booked 3 nights, we got a special offer and this place is now cheaper per night than we have paid for over a week.

After setting up Bertha we did what all good travellers would do – we caught the free shuttle bus to the Outback Pioneer BBQ & Bar for a refreshing cold beer.  Ayres Rock Resort is a huge place with several distinct zones, with a free shuttle bus running all around the resort at approximately 20 minute intervals.  There are also walking tracks for the more adventurous.  We were getting a little hungry but the food service at the Outback Pioneer didn’t start for a while so we caught the shuttle bus to the Town Square and had a good look around there.  We enjoyed a cup of coffee at the Kaluta Academy Café, which is operated by indigenous hospitality trainees.  They did a good job.

It was still too early for the restaurants to open, so we caught the bus back to the Campground and had an equally delicious dinner in Bertha.

We haven’t been to Uluru for nearly 25 years and we are really looking forward to having a good look around both Uluru and Kata Tjuta (the Olgas).  As we’ll be here for a few days we may not post daily updates.  Stay tuned!