We woke to another chilly morning with clear blue skies.  Bertha’s thermometer showed 7 degrees at 7.15am, and it didn’t get much above 15 degrees all day.

After a bit of a slow start we packed up and left Kidman’s Camp and drove to the ‘Back ‘O Bourke’ information centre.  We have been here several times before so we didn’t go on a tour or visit the Outback Stockman Show.    Apart from some general tidying up, this complex appears to be pretty much the same as before.  The notable exception being the new ‘Dance of the Echidnas’ sculptural area out the front.

We did visit the café here for a cup of coffee, and shared a lamington the size of half a brick.

From ‘Back ‘O Burke’ we headed into town and went for a quick drive around town before parking Bertha very close to the Wharf area.  There are some stunning views here of the river and the reconstructed wharf. 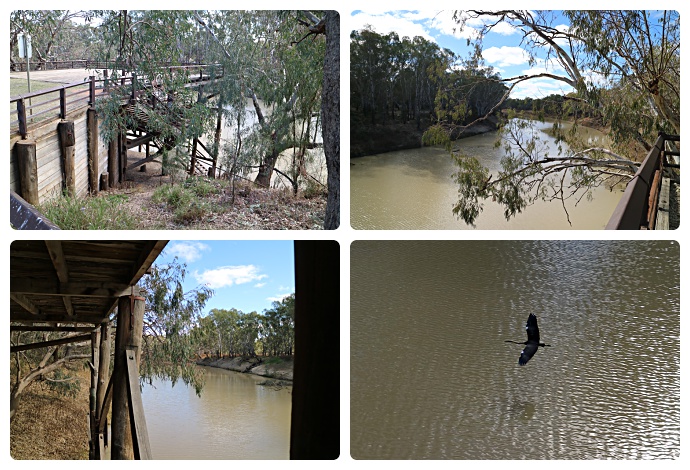 Views from the Bourke Wharf Area

Crossley Steam Engine & Shops and Cafes at the wharf 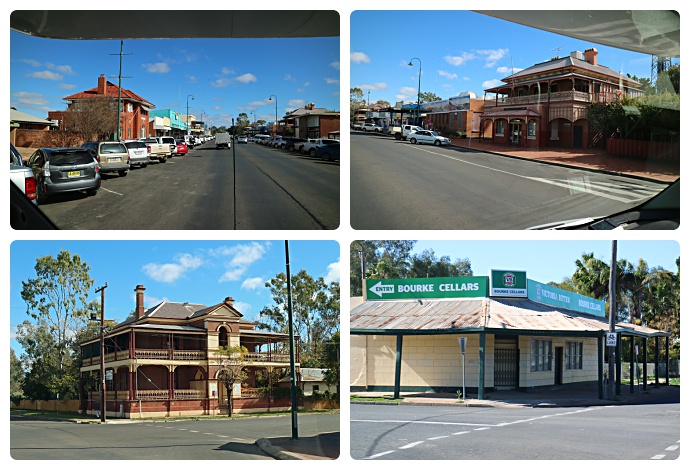 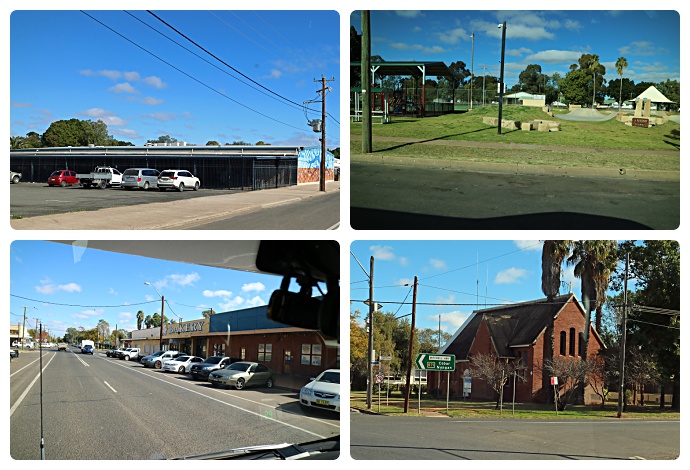 We then went for a walk around the wharf area before we stopped at the legendary Morrall’s Bakery Café for lunch and to buy some bread.  Then we headed back onto the Kidman Way towards Cobar.

Oversize load along the highway

Not very far out of Bourke we were slowed down by some very lengthy roadworks, controlled by traffic lights.  Traffic was one lane, one way only down the very middle of the road, as both sides were being graded and hopefully resurfaced.  It took a looooong time to get through the roadworks.

Today’s drive was a bit different to the last few days.  Much of the road shoulders had been graded, presumably for flood mitigation purposes, but it is interesting to note that there is no roadkill with the wide grading.  We’re not sure if this is a planned situation but it is certainly a lot more pleasant driving without having to put up with the roadkill slalom we experienced over the last few days.

There was, however, a difference in the wildlife we saw along the way.  We didn’t see any kangaroos today, and as noted above we saw a lot fewer kangaroos as roadkill.  I don’t think we saw a single emu, but there were literally hundreds of feral goats along the way.  Most of the goats were in smaller groups and there were quite a few goats with young kids (often twins), and a few obviously pregnant goats as well.

Some of the goats we saw along the way

About 160 kilometres from Bourke we arrived in Cobar.

Ann had booked our accommodation at Cobar Caravan Park this morning and as we have been here several times before and our details were on file we breezed through Reception much faster than others in the queue.  We were allocated a nice quiet site, with all four wheels on a level concrete slab and all services close by.

After setting up we got our chairs out and sat in the sun with a cup of coffee to warm up.  Although it wasn’t exactly warm, it was very nice being out in the sun.  It was then time to pack away the chairs and go for a walk around the park.  Just as we were setting off we bumped into our neighbour from last night in the Jayco Conquest and we had a great chat about motorhomes, places to visit, and so on.  By then we were all getting a bit cold so we said our goodbyes and headed off for a walk to warm up.

Back at Bertha we settled in for the night, with the heater on hand for when it is required.  It looks as though the overnight temperature here in Cobar will be around 5 degrees, so we’re pretty sure that we will need the heater.

We’re not in a hurry to travel too far south just yet so we will be staying in Cobar for a couple more nights.  As usual, we will report on highlights of our stay rather than write a daily diary.