Today was an exploring day with Conway Beach as Base Camp.

First stop was Airlie Beach which was about 40 kilometres away.  We had considered staying at Airlie Beach but had decided to stay somewhere quiet and out of the way like Conway Beach.  We were very glad of our decision once we actually arrived at Airlie Beach.

First impression of Airlie Beach was chaos with major roadworks at the round-about entrance to the main street with detours in place and traffic at a standstill.  Not a great way to welcome visitors and we simply couldn’t imagine trying to tow a caravan through the mess.  It wasn’t only roadworks; there were other building and development works underway as well.  There was no part of the beach front that wasn’t disrupted one way or another.  To us it seemed ridiculous having all this work going on during peak season and disrupting holiday makers with road chaos, dust and noise. 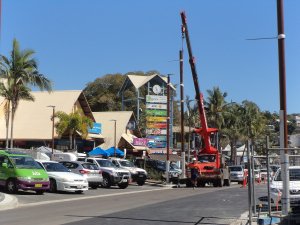 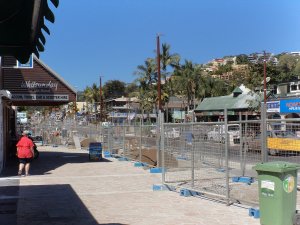 Some of the accommodation at Airlie Beach

Once we had made our way around the detours and found a car park, we went for a great walk along the beach.  We have to say that there are plenty of paths and boardwalks for pedestrian traffic around town.  We found a nice café and had a delicious lunch on the promenade with chaos left and right but we had a great view of the water.

Overall, Airlie Beach probably isn’t our ideal holiday destination, but we’re glad that we’ve been there.  It seems to be all apartments, bars, touristy shops and basically a base for tours to the Whitsunday Islands, fisherman with boats, and generally a younger crowd.

From Airlie Beach we drove about 10 kilometres to Shute Harbour as it was on our must see list.  It wasn’t at all what we expected and was basically a transit point for Island tourists and basically a large boat ramp for pleasure boats and fishermen.  We didn’t even see a coffee shop although there was a multi-storey car-park! 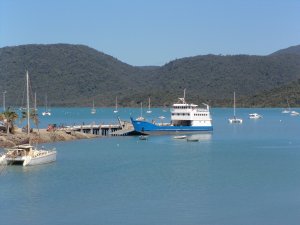 Proserpine was our next stop, and we quite liked it as a destination.  It wasn’t just a tourist trap but a place where people live and work, and that is generally attractive to us as a place to stay.  There were some very interesting shops including an amazing place called Colour Me Crazy which really had to be seen to be believed.  We enjoyed a really good afternoon coffee with date scones at Cafe 22, and it too had some very unusual artwork displayed on the walls.

Colour Me Crazy at Proserpine

Then it was back home to the caravan at Conway Beach for a cool drink in the shade of this lush tropical garden.

We got up bright and early this morning and got ready to hit the road.  We had taken down the awning and put away the outside furniture last night so there wasn’t too much to do.  After farewelling our new friends at Townsville and suggesting that we’ll possibly see them next year, we hitched up and headed for the Bruce Highway.   We had been considering going further north to Mission Beach but in the end decided to head South in a vaguely homeward direction.  Apparently by the start of September it starts getting really sticky up here, so heading South seemed a better option.

The condition of the Bruce Highway has been a real topic of conversation locally and has even hit the federal political arena.  It wasn’t too far out of Townsville when the roadworks began and remained a feature of our travels today.  For much of the way traffic was one lane only so we faced considerable delays waiting at temporary traffic lights.

Our first stop was for morning coffee at Ayr, about 90 kms from Townsville.  Ayr is in sugar cane country and it is quite fascinating to see the cane being harvested and loaded onto cane trains.  It seems to be something of a continuous crop as there were fields being prepared for planting of cane as well as other fields contains cane in various stages of growth.  At one stage the sky was full of embers from a cane processing plant and we wondered if that in fact posed a fire risk.

Embers in the Air 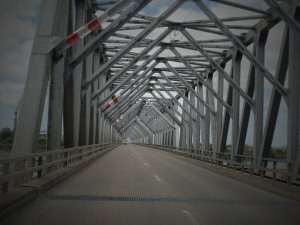 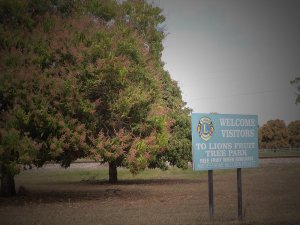 Great Idea – But What Sort of Fruit Is It?

Outside Ayr all traffic came to a dead stop In both directions and banked up for kilometres.  We turned on the CB radio and heard that a car and a large truck had collided and that police were in attendance.  When we finally got to the crash site we could see a truck carrying sweet corn had overturned on the wrong side of the road and there was a damaged car as well.  There was a mini Dingo digger moving the sweet corn off the road.   These situations are really frustrating but at least by having the CB we had some idea as to what was going on.  No matter how serious these situations might be the truckies’ batter is often quite hilarious.

Traffic ahead of us

We finally arrived at Bowen, where we made our way to Queens Beach near the surf lifesaving club and we had a late lunch.  From our seat under what appeared to be maccadamia nut trees we had a wonderful view across the water to places further around the coast.

From Bowen it was down the highway towards Proserpine before turning off to Conway Beach.  The last 20 kilometres or so were quite “interesting” with lots of curves and up and down some quite steep hills.  Going back the other way might also be “interesting”.  Finally we arrived at Conway Beach Tourist Park, which basically appears to be “it” at Conway Beach – the Park’s shop is the only shop in Conway Beach.  This is a very brightly coloured park and appears to be somewhat reserved as a hidden treasure by a small band of regulars who come back here every year and who seem reluctant to share the location of this park with anyone else for fear of spoiling their little piece of paradise.  That being said, they really are a friendly bunch of people here.  We were quite surprised at the facilities that this park has for kids.  There are two jumping pillows and a huge water playground with water slide and more.

After unhitching the Ute and setting up – we didn’t need the awning – we sat outside enjoying the calm and had a cup of coffee.  Then it was off on a walk down to the beach to explore.  The sand here isn’t white but there is plenty of it and huge potential here for long walks along the sand.  Many of the other campers in the caravan park have boats and there is quite good fishing here, apparently.  It certainly smelled great at dinner time!

Unhitched and ready for a cool drink 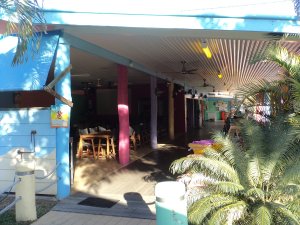 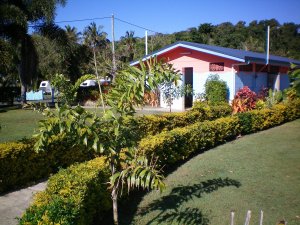 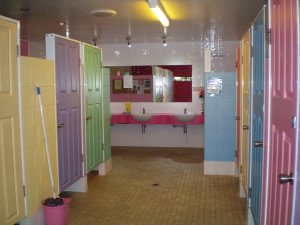 After a light tea we will have an early night.  Today we drove further in one day that we had driven in the last three and a half weeks, and it took us over an hour and a half longer to get here than we expected.  There is plenty to look forward to tomorrow!