Today is the first day of our 2016 “Short” Adventure.  We’ll only be away for two or three weeks so in a way this is an extended shakedown to get used to living in Bertha the Birdsville motorhome.

We got off to an early morning start and were gone by 6.45am.  Part of the reason for the early start was that we had booked Bertha in with the dealer in Campbellfield to make a couple of adjustments before we left and it was easier to leave early and miss at least some of the peak hour traffic.  We were able to leave the dealer with a happy Bertha by 9.30am.

First stop of the day was at a service centre in Rockbank where we filled up the fuel tank and had a snack to compensate for having a light breakfast what seemed many hours earlier.

We were soon on the Western Highway and made quite good time.  Weather wise we had blue skies, some clouds, and sunshine, but the wind was a shocker and at times I struggled to keep Bertha on the road.  Most of the highway seems to be very exposed, and roadworks also contributed to a general lack of any shelter from the wind.  My shoulders are quite sore from wrestling with the steering wheel.  Seeing banks of wind turbines only confirmed that we were travelling through a very windy area.

On the Western Highway

On the Western Highway 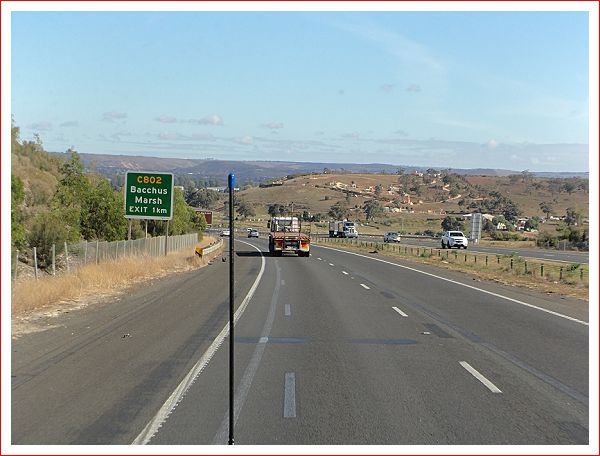 On the Western Highway – Very Dry

Our lunch stop was in the nice little town of Beaufort.  This is an old but quite busy place that the highway has not yet been diverted around.  Plenty of large trucks go through the middle of town on their way through to Adelaide.  We found a great local bakery and enjoyed some very flavoursome vegetable pasties and shared a huge pink lamington (we also had a bit of a walk in the wind to compensate for the kilojoules).

From Beaufort the roadworks increased and plenty of new work was evident, so much so that the Tom Tom GPS got lost and thought we were driving through paddocks.  As a result we missed a couple of potential rest stops that we had intended to check out.

Eventually we all got organised and decided to stop at the Canadian Gully Bushland Reserve (Camps 8 V478), which is very close to Stawell.  We realised that we had actually stopped here overnight several years ago but there was a small lake here then – no such thing now.  In general it has been very dry as we have travelled west.  After a cool drink we decided that it had been a reasonably long day with some difficult driving so we would set up camp here for the night.  We found a good level and quite sheltered spot well away from the road and set up.  There are no facilities here but we’re self-contained and we have phone, TV and wireless internet access, so we’ll be fine.

Out of the city – at last! Ahh, the serenity!

We intend to keep travelling west towards South Australia’s Eyre Peninsular, but we don’t have any specific plans or accommodation bookings.  Exactly how far we travel each day is flexible, and where we end up each night will in part depend on the weather.

We look forward to continuing our adventures tomorrow.