When I first poked my head out the van door this morning it was a crisp and chilly with a heavy fog as far as I could see. There were ducks and kangaroos searching for food amongst the caravans. I did exactly what any sensible person would do – I came back inside the van, turned on the heater, and got back into bed!

Eventually things warmed up a bit and the fog disappeared, so we thought that we should get up and get things happening. As a result we made a bit of a late start. We hadn’t unhitched so getting ready didn’t take too much time, and we were able to stop at a tap on the way out to top up the water tanks.

We drove along the Cunningham Highway to Goondiwindi where we turned onto the Newell Highway. Some 40 kms past Goondiwindi we stopped at the North Star Road Rest Area – N761 – for lunch. This is quite a large area with what appear to be very new amenities and quite a few good, sheltered spots where you could stop for the night.

Driving today has been a real mixed bag, and has been quite difficult and tiring. The road has been uphill and downhill, straight or with sweeping bends, good quality roads and shocking quality roads, roadworks, extra wide loads coming towards us, and practically anything you can imagine. At times the amount of road-kill on the road tested my slalom driving skills! 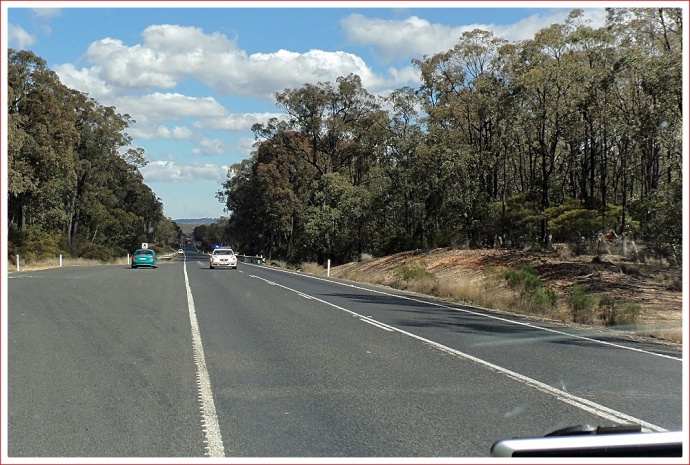 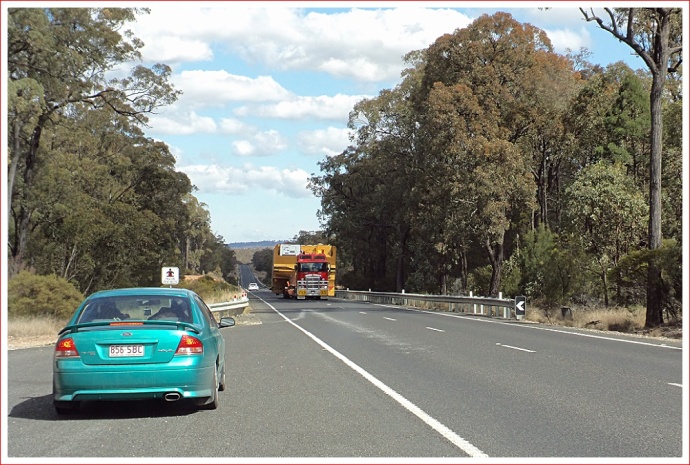 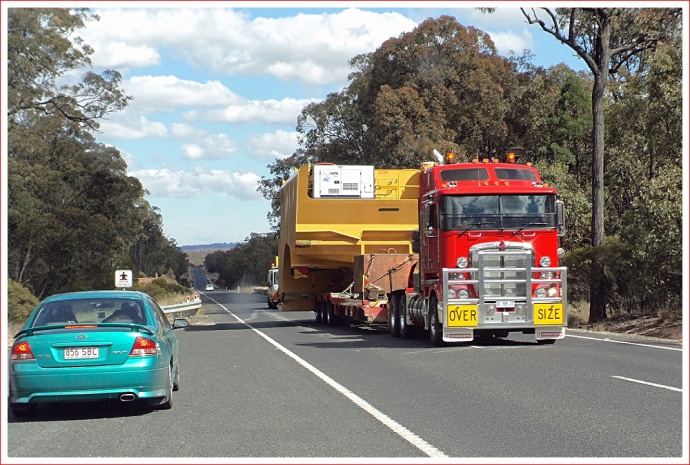 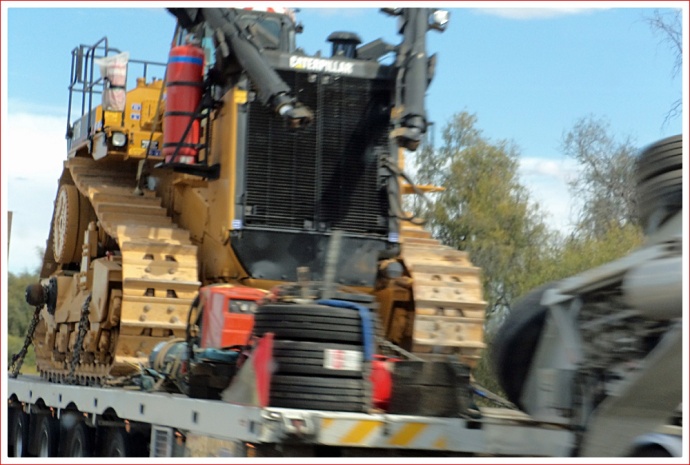 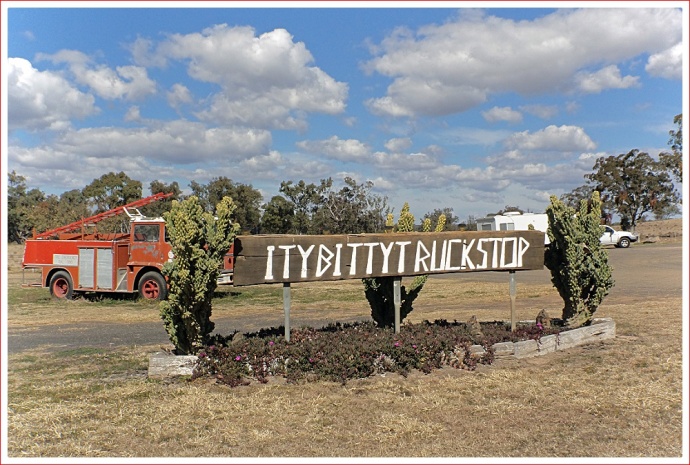 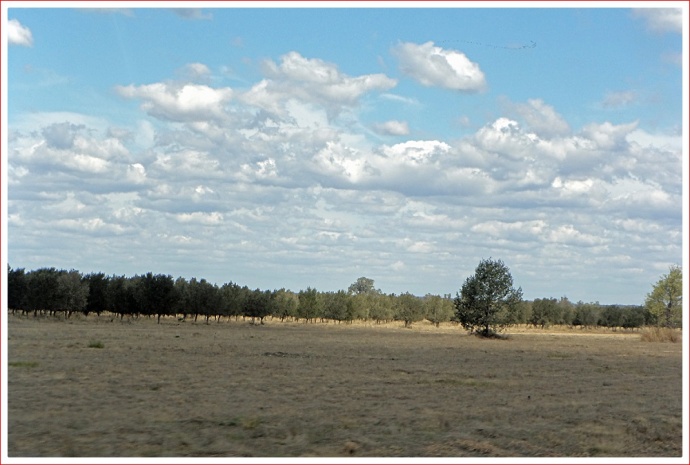 Our final destination for tonight was the Moree Showgrounds – N765. Ann and I are both a bit over caravan parks and when we can’t find a suitable free camp – ideally a lake or dam – stopping at sale yards and similar is a good compromise. There is usually power and water, often a dump point, almost always plenty of space, and usually basic or better amenities. Moree Showgrounds fits the bill perfectly with only a few vans here; we have power and water and a nice big level site. The amenities are very basic – but our van is self-sufficient so that’s not really a problem. 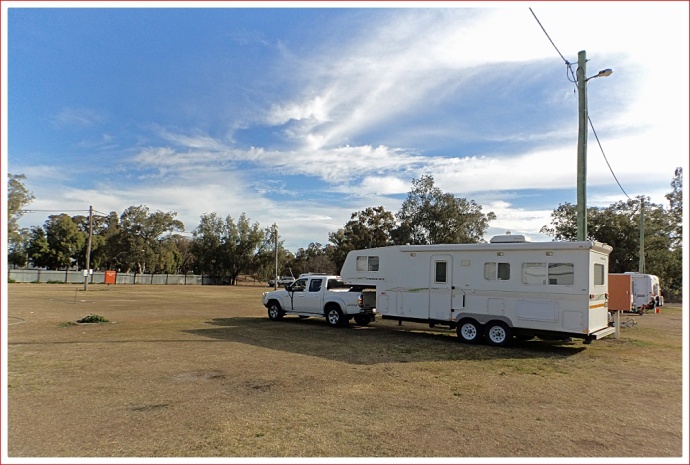 Plenty of room at Moree Showgrounds

We did a proper set-up and unhitched and drove into town to top up with diesel and to shout ourselves a decent cup of coffee.  Then it was back to the van for dinner and update the blog.

For a combination of reasons we have decided that we need to make our way home more quickly that we had originally planned. In our short time here, we caught up with our friends Downunda and Faye, who are staying at Cotton Tree in Maroochydore where we stayed last year. Afternoon tea at Cotton Tree with Downunda and Faye stretched into Happy Hour when Carole and Robin joined us. Happy hour is always fun at Cotton Tree.

Our first challenge today was to get out of our site without damaging anything. It was a bit of a tight fit but after moving some concrete edging and under the watchful eye of the owner of the van in front of us – he actually put his awning up to be on the safe side – and having the Ute in low range, we slowly and carefully made our way to the main driveway. What a relief! Big 4 Forest Glen is not our favourite caravan park and we won’t be coming back again.

Next challenge was to make some sense of the Queensland motorway/freeway system. There are lots of freeways and motorways and exchanges and it’s quite confusing to the uninitiated. There is also a surprising volume of traffic at all times! We had been advised to ignore the Garmin GPS to get through to Ipswich and to go down the M1 and then the M2 and this added a little bit of extra excitement. Motorways are great at moving traffic quickly, when there aren’t roadworks that is, but if you are moving from one motorway to another there aren’t too many opportunities for coffee or other stops. 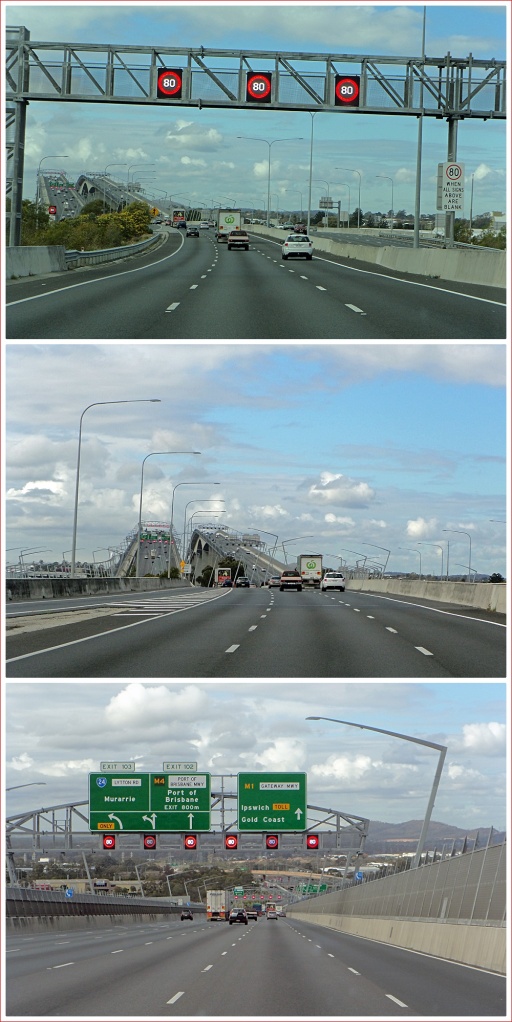 We successfully made our way over the Gateway Bridge, which is an amazing structure and after sneaking into a servo along the way for a quick stop, we eventually stopped for a more relaxed coffee break somewhere along the Cunningham Highway some 170 kms from Forest Glen. Our next stop was to top up the diesel at Warwick and we then made our way to the famous Warwick Pie Shop for a couple of their delicious pies for lunch. 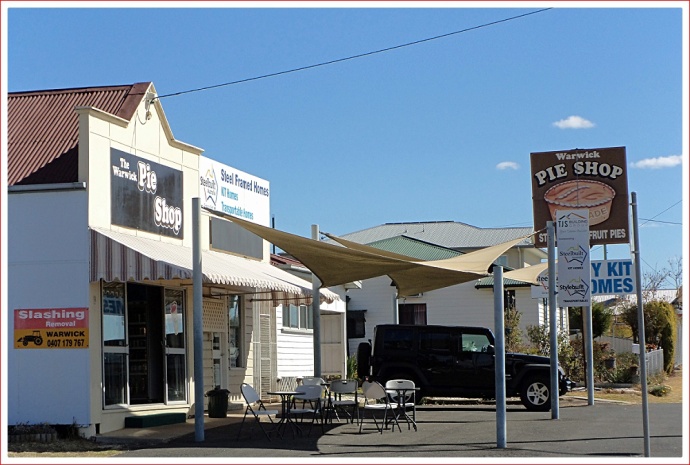 Driving today has had its challenges. There were roadworks of course, but we’ve come to expect that. The most spectacular part of the drive was crossing the Great Dividing Range, mostly in 3rd gear. It’s quite amazing countryside with huge cuttings into the mountains for the road, and it’s quite steep in places. This type of driving really chews through the fuel in the Ute. Ann got to see the scenery a lot better than I did, and hopefully some of the photos will do it justice. 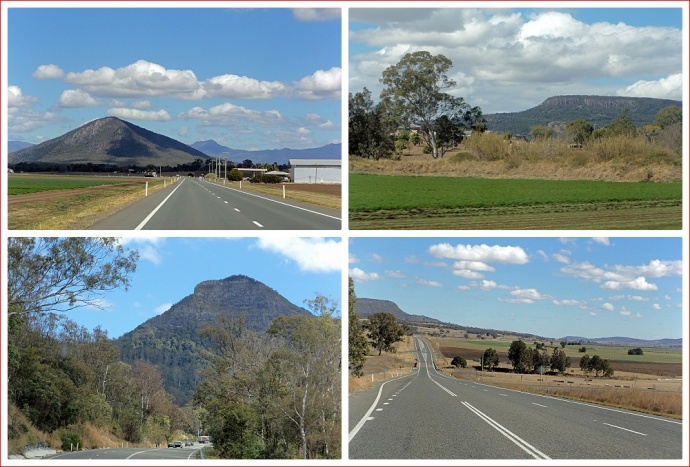 After lunch it wasn’t too far from Warwick to Lake Leslie, where we stopped at the Washpool Camping Ground. Ann had rung the caretaker in advance and he had explained the process. Basically, there are 60 acres on the banks of Lake Leslie and you can camp pretty well anywhere you wish for a modest fee per head per night. We were told that there are a number of powered sites, at an extra $3.50 per night, which actually turned out to mean that there were a few power poles spaced irregularly around one area, with a few randomly placed water taps as well. There are no marked sites so you just find the best place you can amongst the trees and as near as you can get to power or water or both, without blocking any of the unmarked roadways. There is a brand new amenities block, including showers, which is in better condition that those at many caravan parks we have been to. There is also a dump point.

We found a great flat site and connected to power. Lake Leslie is a beautiful spot. The lake is stocked with fingerlings each year and attracts many fisherpersons. There were several boats out on the lake and others fishing from the shore. There are plenty of ducks and other birds and kangaroos feed by the water’s edge. We went for a long walk around the camping area before settling down outside to catch up on some reading. As it got a bit cooler many of the other campers started up camp fires; some for warmth and other for cooking as well. There were some delicious aromas coming from some of the camping sites. 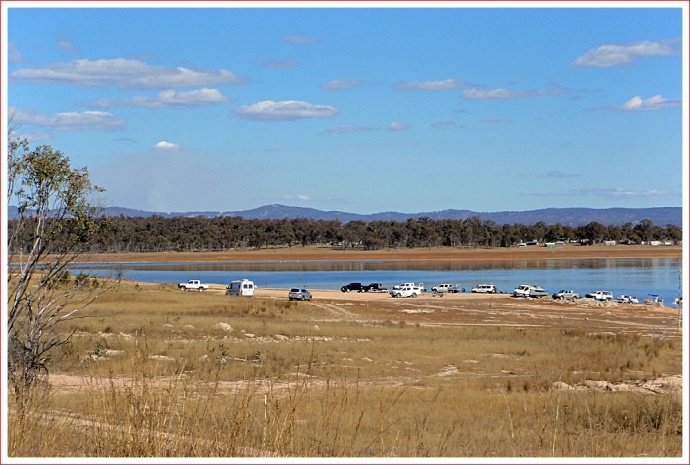 Our first look at Lake Leslie – the angling club 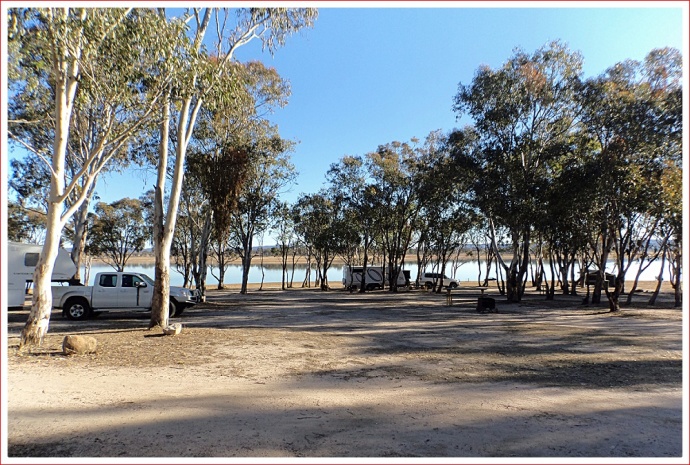 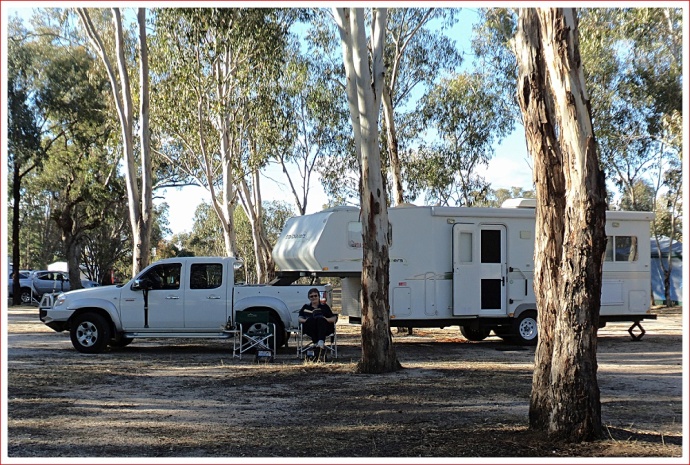 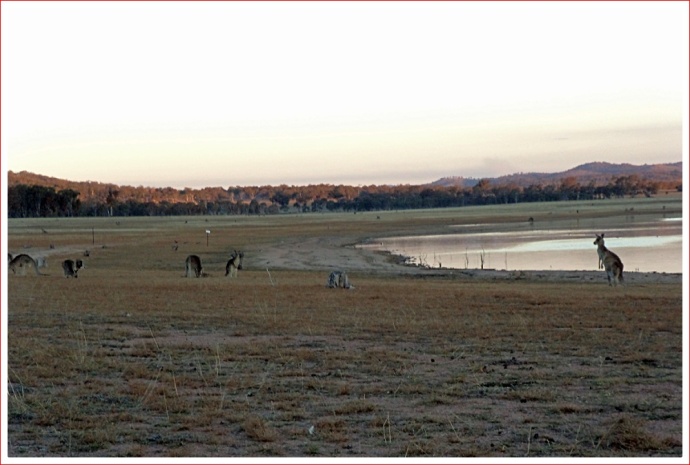 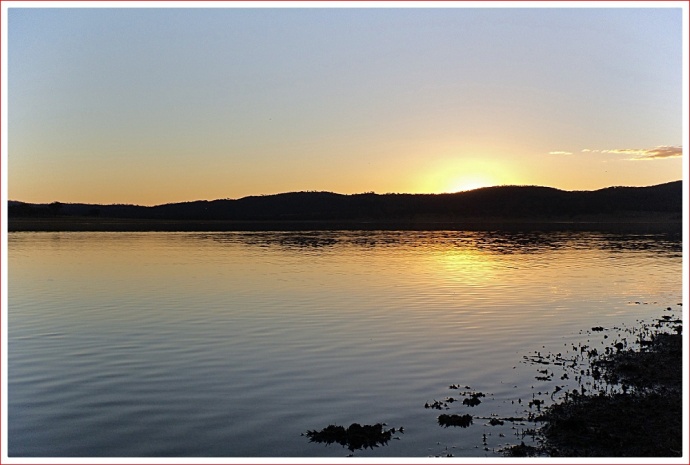 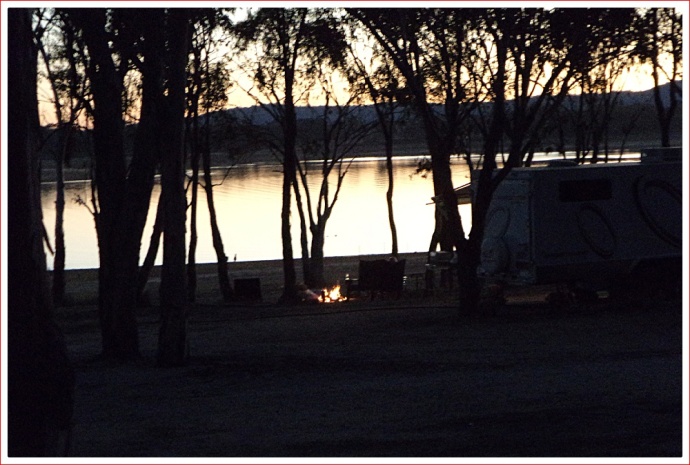 Campfires at Sundown at Lake Leslie

After watching a beautiful sunset we packed up the chairs and went inside for the night.

It’s places like this that make caravanning so enjoyable!