The storm continued overnight.  We put the TV aerial up for a short while but soon wound it down again as it was so windy.  We did put the slide-out out as it is difficult to sleep with it in – that’s an adventure of its own for another day.  I actually slept very well once my head hit the pillow, as it had been a hard day driving, but Ann stayed awake listening to the sounds of ripping awnings and tent pegs being hammered in.

By morning the storm had calmed down and there was blue sky.  We decided to stay put in Renmark and have a look around town rather than venture potentially back into the storm.  It does seem that the worst of the storm has passed us now – we saw some photos from the SA coast, where we are heading, and we are happy that our decision to detour north has been worthwhile.

The caravan park this morning looked quite different.  The Avanners had their AGM somewhere in town so we were surrounded by Avans but no tow vehicles.  Just looked a bit strange.

After a bit of a late start, we headed up the walking path from the caravan park into town.  This is a proper bitumen path away from the roadway, but this morning was showing signs of the storm.  The path followed the river and it was interesting to see several house-boats moored along the path.

Houseboats along the river bank.

The Renmark Paringa district is renowned as a state gateway to South Australia.  Founded in 1887, Renmark is Australia’s oldest irrigation settlement, thanks to a joint agreement between the State Government at the time and Canadian engineers, George and Ben Chaffey.  The brothers were instrumental is establishing the system of irrigation much of which is still in use today supporting the abundant horticulture and viticulture industries.

Renmark has a great many beautiful old buildings, including the historic Irrigation House and the Renmark Hotel.  There are also some very nice modern buildings, and a significant amount of new housing development. 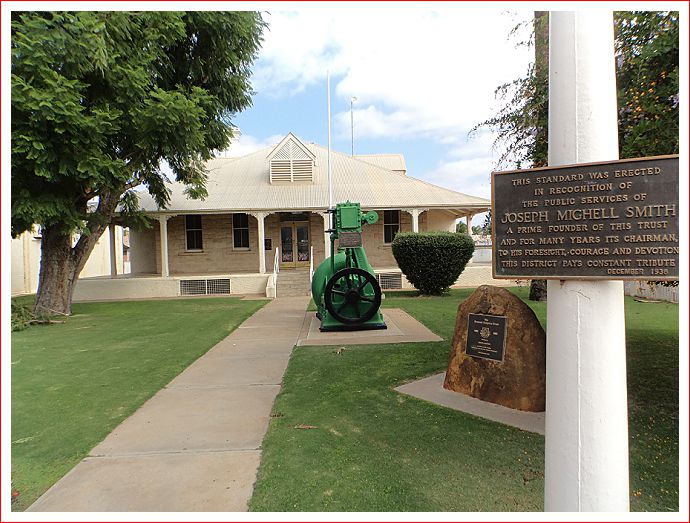 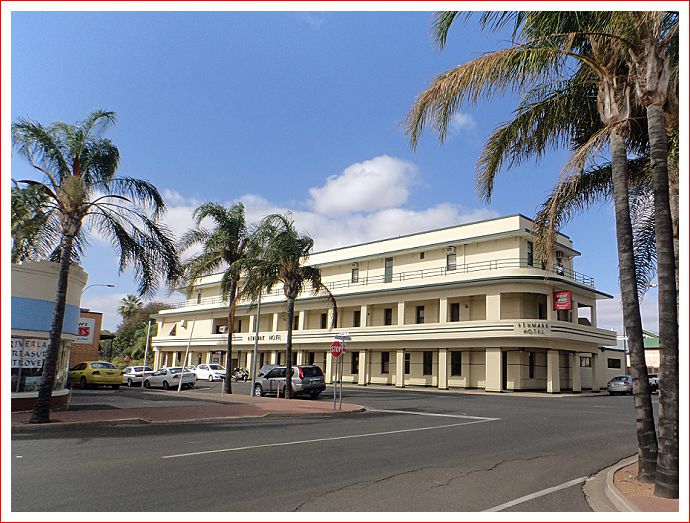 One of the features of the main street in Renmark is the very wide median strip dividing traffic and the inclusion of lawns, gardens, tourist facilities etc within that median strip, much like we found in Nhill. 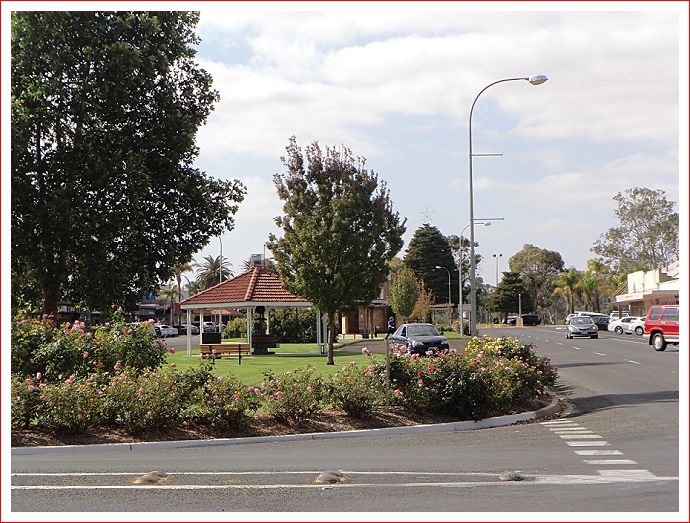 Although Renmark is quite a busy town, all is perhaps not as rosy as it may seem as there are quite a few empty shops around town and there are some signs of hardship.  This is a real pity and hopefully the town can halt the decline and return to the status it clearly deserves.

After a good walk around town, we stopped for a light lunch at the Renmark Patisserie.   The range of cakes and buns was enormous, but we both remained strong willed and opted for a healthy lunch.  The place was packed with all the tables full and a lot of take-away traffic.  We obviously chose a good place for lunch!

After a quick trip to the supermarket for supplies of fresh fruit and veggies, we returned along the path to the caravan park.  We hadn’t taken too much attention when we arrived yesterday, but right next the entrance to the Big 4 is a decent looking boat ramp and a Lions Park with picnic and bbq facilities and childrens’ play equipment.

As we walked passed the caravan park swimming pool a fellow guest told us that the water was cold but it was more than compensated by the warmth of the spa.  What a pity we forgot to pack our bathers.  We’ll leave the pool to the intrepid Avanners. 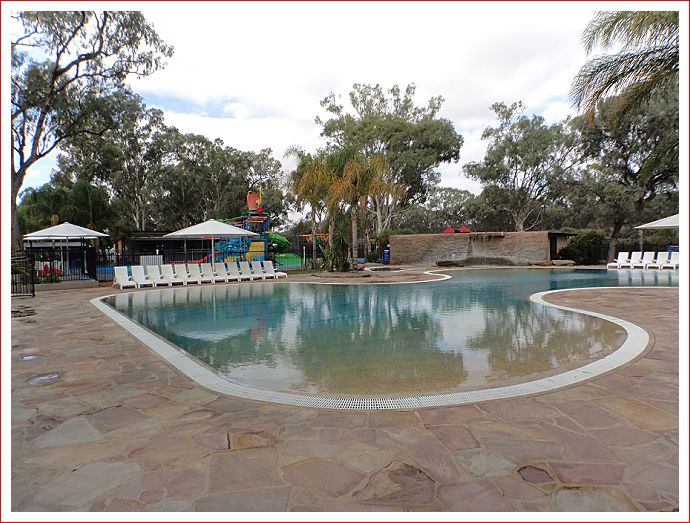 Returning to Bertha we spent a bit of time catching up with some reading, emails, etc and generally taking it easy.  We then went for another good walk around this caravan park and realised just how big it really is, and they are about to open a new area that will cater for a heap more vans and motorhomes.

Another view of the caravan park in better weather.

As dusk settled in I headed off to the camp kitchen to cook some lamb steaks for dinner, which was accompanied by a delicious fresh salad and a nice glass of red.

We really needed a bit of a quiet day today after several challenging driving days.  The weather forecast for the next week or so looks very promising so we look forward to seeing the sunny side of South Australia.

We had very heavy rain overnight, which meant that we both had an interrupted sleep.  As newbie motor-homers we were worried about leaks, especially around the slide-out, but finally the weather died down and we got back to sleep (with no leaks).  Eventually we were woken by kookaburras singing and heralding in a nice sunny morning with clear blue skies.  We took our time getting ready and packing up and generally enjoying the sunshine.

In due course we headed out of the caravan park and back across the Murray River to Mildura, where we stopped for a coffee at Hudak’s Bakery and a spot of shopping before finding our way to the Sturt Highway and on our way to Renmark and beyond.

We really like Mildura and the emphasis on good food and wine, and the weather is usually pretty good as well.  Passing through the outskirts of Mildura it just feels great to be surrounded by grape vines, olive trees, stone fruit trees, and more.

Plenty of grape vines along the way.

Once on the Sturt Highway the weather changed and the wind blew up considerably.  Our theory was that by heading North from Nhill to Mildura and then across to South Australia we would miss the most of the storms, and to a point that was right, but we didn’t bank on the cross-winds.  It was really heavy going.  The further West we got the worse the wind got and the worse driving conditions got.  At times we slowed to what seemed like a snail’s pace.

Wonder how far this cyclist got in the storm?

We stopped for lunch beside the lake at the Johansen Memorial Reserve in Cullulleraine (Camps 8 V325) where we found a nice sheltered spot out of the wind.  This is also the site of the Millewa Pumping Station and there are some great walks around the lake.  There are grassed areas, table and chairs, and signs indicating it was suitable for swimming, although today surfing would have been a better bet.

Returning to the Sturt Highway the wind got worse.  There were infrequent respites when there was a bit of vegetation beside the road providing a bit of a wind break.  At other times the entire sky was filled with dust and dirt, presumably from farmers cultivating, hoping for rain.  Headlights on was definitely the order of the day.

Dust storm as it approached.

Next stop was at the SA quarantine station near Yamba, where the very friendly fruit fly inspector relieved us of a bag of home gown vegies that we hadn’t been able to eat yet.  It just seems a real waste; Mildura has some fantastic fruit and vegies but if you’re heading West there’s no point buying any of it. 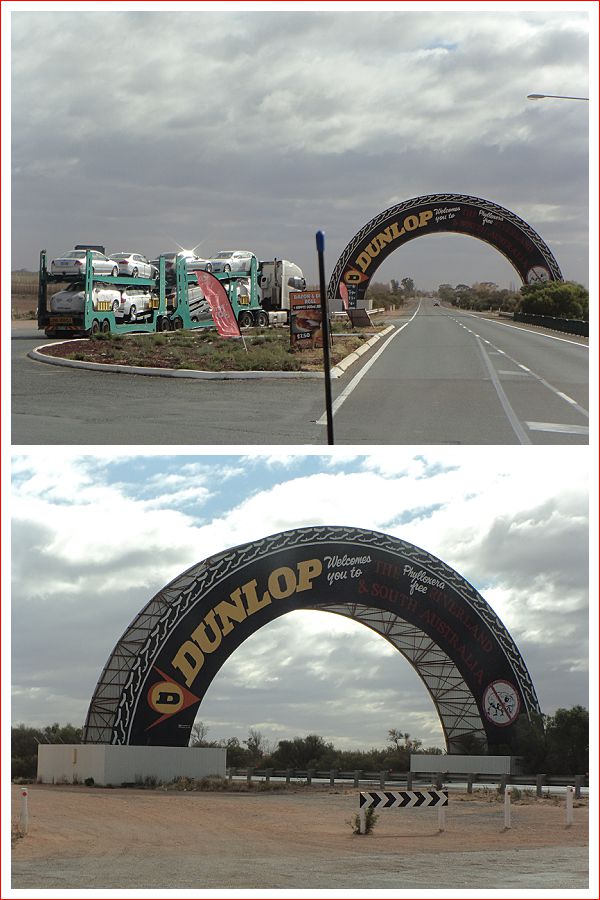 Leaving the quarantine station at Yamba.

The bridge to Renmark.

Eventually we arrived at Renmark.  In our original plan this was to be our lunch stop but the terrible weather conditions put an end to that.  After a good drive around town we followed the signs to a caravan park and ended up at the Big 4 Renmark Riverfront Holiday Park.  To be honest we have tended to avoid Big 4s as in the past we have had some real problems with access and getting a Big Rig onto some of their sites, but this park is a great surprise.  It is huge, it has tremendous facilities, there are some nice looking cabins overlooking the river, the sites are generous, and there are even some concreted double-slab sites (ie room for a van, annex and tow vehicle). 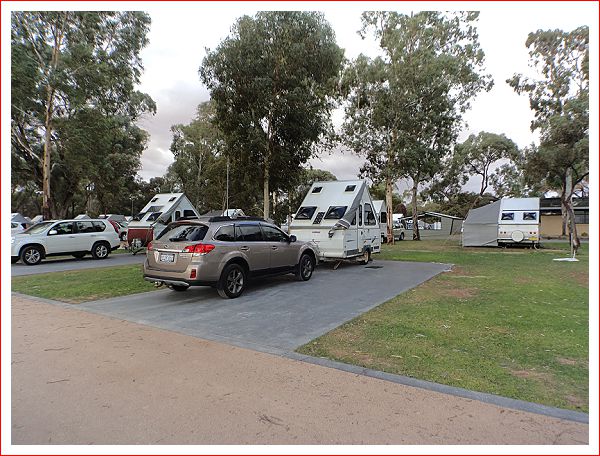 The most amusing thing is that we have arrived in the middle of an Avan convention, which means that we are surrounded by over 230 tiny Avan caravans.  We have only spotted 3 other non-Avans!

AVAN Convention – an impressive sight lined up along the river.

We have a great site though, absolutely flat, quite protected, and close to all necessary facilities.  And it’s not under any trees with potentially falling branches!

Since we arrived here the wind has been increasing and it is now blowing up a gale, as well as raining quite heavily.  Our next door neighbour told us that we are expecting 100 kph winds tonight!  We have been for a good long walk as the temperature is quite warm and we can tolerate the wind for a limited time.  Back in Bertha we are all set-up although we haven’t put the slide-out out, just in case.  All around us there are Avanners struggling with flapping awnings and annexes, but at least we feel safe and sound.

We’re not sure what tomorrow will hold, and what we do and where we go will depend on the weather.  We’re in a bit of a conflict as we wouldn’t mind spending a day looking around Renmark, which seems to be a really nice town, but on the other hand we would possibly prefer to keep on the move.