It’s Friday 13th today but we’re not superstitious – we woke to a beautiful warm morning with blue sky and hardly a cloud in sight.  What a great start!

As usual we got off to a leisurely start.  We decided last night not to worry about the steelworks or Whyalla ship tour but to head off to the beaches we had come to see as quickly as possible, so we only had a short distance to drive to our first destination.

We started the day by taking a drive around Whyalla.  We explored some of the newer suburbs and were very impressed by the Westland shopping complex.  Still, the red dust was everywhere and things probably looked a bit younger and brighter in the sunshine.  We stopped to refuel Bertha, and as Maccas was next door to the servo, we had a quick coffee before continuing out of Whyalla for destinations further South.

Beautiful weather, nice straight roads in good condition, an occasional undulation to prevent boredom – what more could we want?

Not far out of Whyalla we came across a sobering sight –the wreckage of a fatal smash involving a car and a truck that happened only yesterday.  The truck was almost unrecognisable and there was plenty of heavy equipment on the scene to remove all the debris onto the back of several tray trucks.  Certainly makes you concentrate on your driving after seeing something like that!

Very soon after, we were passed by a “Wide Load” warning vehicle after which a Police Escort waved us right off the road.  Clearly something big was approaching.  Then came another Police Escort and two huge trucks, and despite all my experience taking photos of moving vehicles I stuffed up the photos of the trucks going passed.  Damn!

After the convoy had gone we had black stuff all over the windscreen.  The wipers only made things worse so we pulled off into a rest area as soon as we could.  We discovered that there was sticky thick black stuff all over the front and side of Bertha.  I didn’t want to leave it all there to dry in the sun as we travelled, so I spent the next 45 minutes cleaning it off with a mixture of metho and water, which did a pretty good job.  In the meantime a couple of caravans had pulled up for a lunch break.  Ray came over and introduced himself and we had a bit of a chat.  His theory was that we had been sprayed by hydraulic fluid from the passing truck, and that made total sense.  The trucks had gone passed him but he had been able to pull well off the road before they crossed paths and had probably therefore missed the worst of it.  He did check the front of his X-Trail before he left though!  Ann and I had lunch after I had cleaned Bertha and continued towards our destination.

Along the way the scenery changed from red dirt to saltbush to scrub to mudflats with mangroves.  We also passed an impressive Arrium mine where the terraces were very clear and you could see where revegetation and reclamation works had begun. 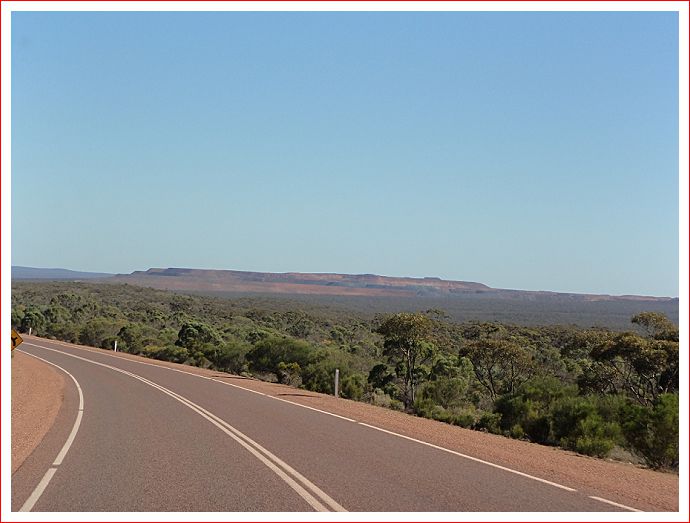 We soon arrived on the outskirts of Cowell.  There are two caravan parks and a motorhome park (self-contained vehicles only) in Cowell so we drove off the highway to check out the Harbour View Caravan Park.  It looked quite nice, had plenty of space, and great views across to Cowell, but we decided it was too far from town. 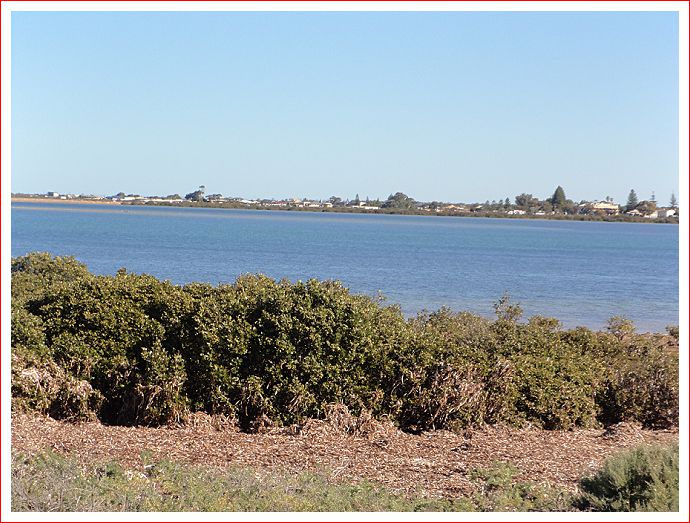 View across to Cowell.

So we continued into town to the Cowell Foreshore Caravan Park which is an older park with large sites, clean amenities but most important for us – location, location, location.  It is only 100 metres walk into town and not much more than that to the jetty and boat-ramp.  It is well set-up for fishing people with separate cleaning tables, crab cooking pots and a boat wash area. 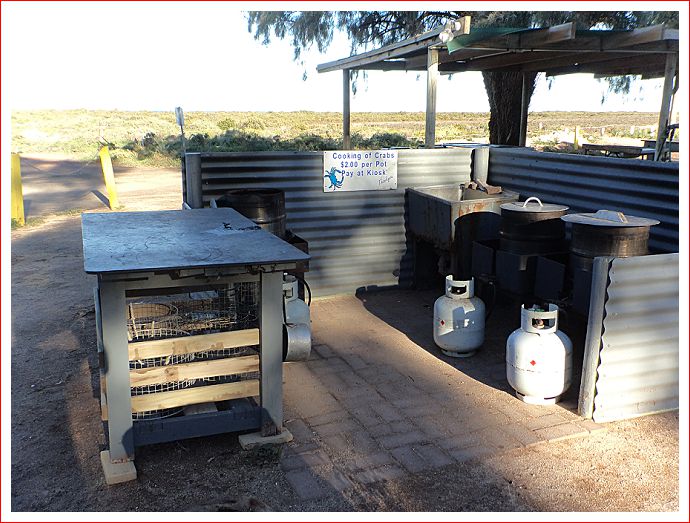 After doing a quick set-up of Bertha we put on our walking shoes and headed off into town.  Cowell is a nice, quiet little town with most of the shops, services and facilities you would expect.  We were impressed by a tile/sculptural/artwork piece near the jetty.

According to the tourist brochures there are some worthwhile sights and tours nearby so we might check them out tomorrow.  We stopped at the Franklin Harbour Hotel for a cold beer (Coopers of course) outside to contemplate tomorrow and the world in general.

After our refreshments we walked over to the Jetty.  There were quite a few cars with empty boat trailers parked there so hopefully some-one is catching some fish.  We stopped in at the Fishbox Kiosk to pick up some fish for dinner, but they were sold out!  A couple fishing from the Jetty weren’t having any luck, but perhaps they were there at the wrong time.

On the way back to the caravan park we made a minor detour to the mangrove walk, which is a board-walk through the mangroves with several shelters along the way.  We were a bit surprised that there were mangroves here.

Finally it was back to Bertha until it was time to cook our steaks in the camp kitchen.

It doesn’t get much better than this!  Bring on tomorrow!