We woke to another glorious day – again!  Deep blue cloudless skies, green grass, large leafy gum trees – are we really in the outback?  Life can be tough but someone has to do it!

We went on a quick drive around Marla before heading back to the Stuart Highway – there’s not a lot to see in Marla.  Once back on the highway, the landscape today was far from flat and boring!  Although most of the roadside was flat, there were mountains in the distance, rocky outcrops close to the road and the vegetation changed markedly from time to time. 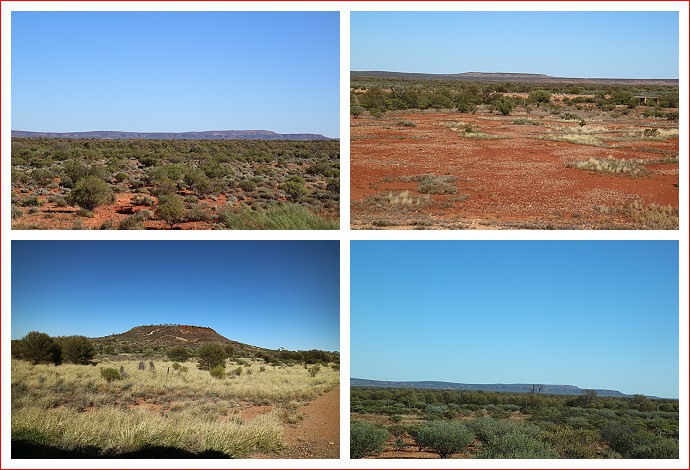 Views along the way

There also seemed to be more traffic on this stretch of highway than we had experienced before – large trucks, caravans and motorhomes, quite a few motorcyclists either alone or in groups, and even a loner walking a wheel-barrow!  At one stage we crossed over the Ghan railway line. 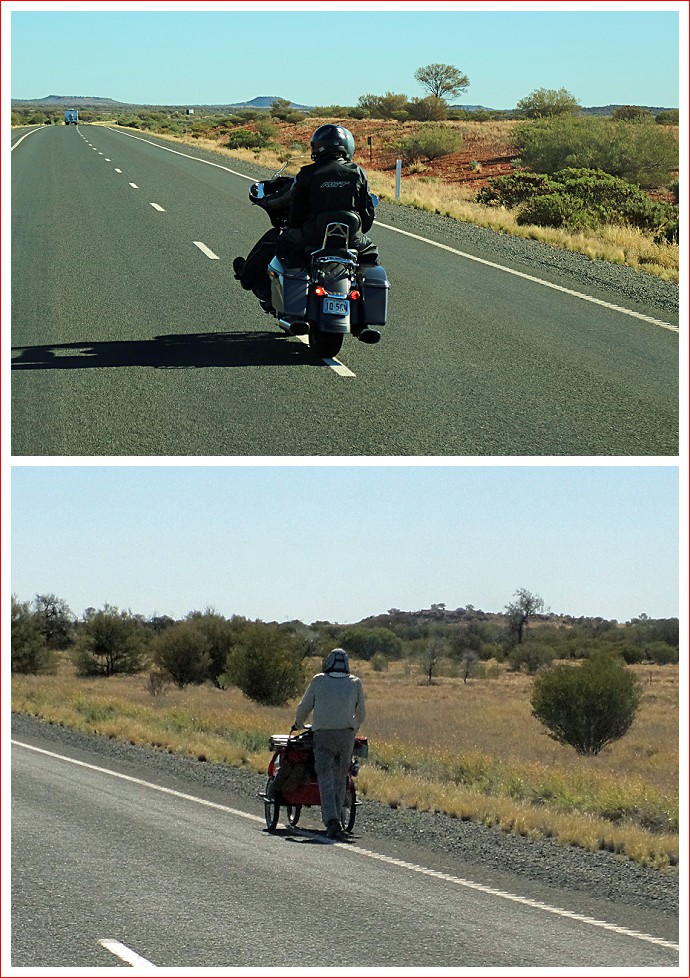 One of the bikes and the lone walker – what was he thinking?

Some big trucks were going up the highway 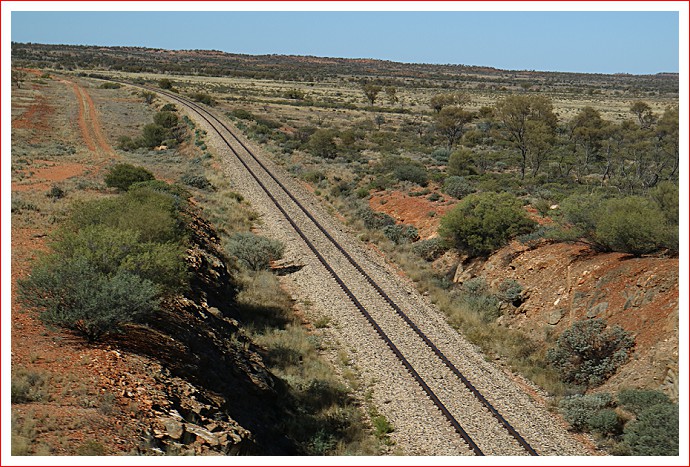 Another observation formed over the last several days is that there are many wrecked cars abandoned on the sides of the highway – there must be a story there.  Also, every town seems to have a wrecking yard full of wrecked cars, plus many properties also have lines of abandoned cars in their yards.  As a classic car enthusiast I am sad that so many cars are just left out in the elements to rust away and die.  Not a very dignified end at all.

Some of the abandoned cars along the highway

Our first stop for coffee was the Agnes Creek Rest Area (449 Camps 9).  Set off the highway down a short strip of dirt road, there is a large gravelled area and an associated large area of red dirt.  Both areas are quite flat and there is evidence of many camp-fires.  Agnes Creek itself is bone dry, but obviously carries a lot of water in the wet.  There is clearly enough water even when the creek is dry to enable gums and other larger trees to exist in this area.  This would be a great place for an overnight stop for self-contained vehicles – there are no amenities.

Views of Agnes Creek Rest Area – no water in the creek

As we pulled into the rest area we realised that we hadn’t charged the camera battery the night before – it has a 240V charger.  Not to be stopped from taking photos, we pulled out and connected the inverter and plugged in the camera battery charger.  The solar panels did a great job and even with the charger on, Bertha’s house battery was still receiving a decent charge!  This is precisely the sort of technology that free-campers and the like need on the road.

Next stop was not far along the highway at the Marryat Rest Area (450 Camps 9).  Both this rest area and the previous Agnes Creek area had great reviews in the Camps 9 book so we thought that we should check them both out.  Marryat is a bit smaller and a bit closer to the road, but would also be a great place to stop overnight – again- no facilities but it does have an emergency telephone.

We then stopped at the South Australia/Northern Territory border – there is a rest area here with drop toilets but it’s probably better for a day stop only as it is a combined truck stop and rest area.  One thing that we have noticed on our travels through South Australia is that they are very good at providing separate rest areas and truck stops, so that cars and RVs don’t get in the way of trucks, and vice versa.

Once in NT things seem different.  The roads aren’t as good, although it looks as though the sides of the road have been mown quite recently.  It also suddenly seems to be hotter.  The landscape and vegetation also seem to be “different”

Lunch was at Kulgera Roadhouse, about 20 kilometres from the border, after filling up with diesel ($1.76 per litre).  We just had something light in Bertha rather than partake of roadhouse food. 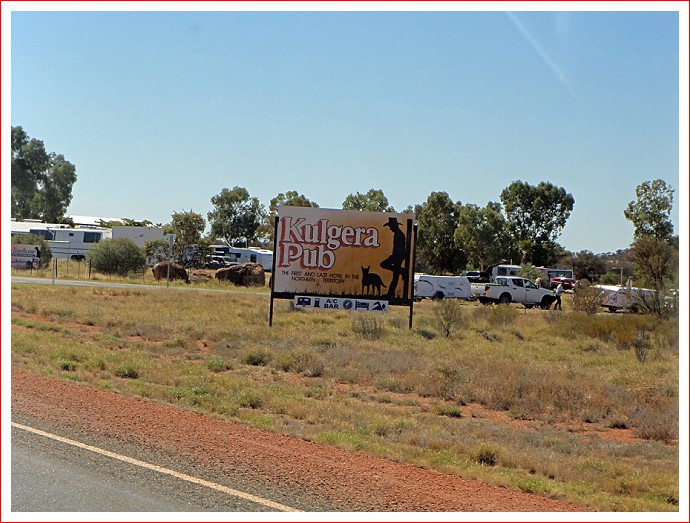 During the next stage of our journey we noted that we hadn’t seen much wildlife at all.  A handful of cattle on one property, and occasional eagle, flocks of tiny wrens or similar, and that was about it.  It seems that at this time of year all the signs warning about animals wandering on the road are unnecessary – maybe things change in different seasons.

Our final stop for the day was at Erldunda Roadhouse, which calls itself “The Centre of the Centre of Australia”.  It is located on the junction of the Stuart Highway to Alice Springs and Darwin, and the Lasseter Highway to Uluru.  This is big complex with fuel, shop, motel units, swimming pool, caravan-park, tavern, and more.  It also uses bore water which is not fit for drinking but certainly keeps the place looking nice and green.  Unlike last night the parking sites are on the grass. 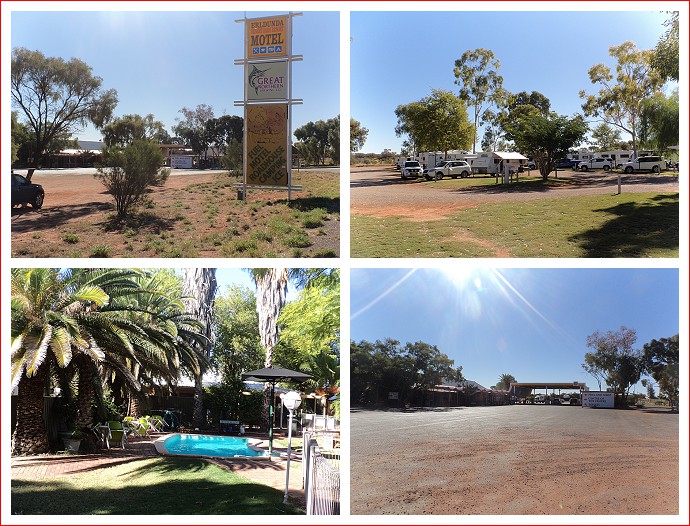 We are now within striking distance of Uluru and Kings Canyon.  We’ll see where we end up tomorrow!