We both slept like logs and woke up to a nice morning with clear blue skies (they’re back)!

This place is pretty much as close to free-camping paradise as one can ask for.  Plenty of space, basically flat sites, toilets and showers, fresh water, clothes lines, seating, access to power points – and all for a suggested donation of $5 per person per night.  Why be in a hurry to leave?  So we decided not to.

The Wyandra Camping Ground is managed by the local progress association and relies on donations to upgrade and maintain the camping area, and other community services around the town.  They receive no council funding but do a great job.

An added bonus here is the wild-life.  There is plenty of birdlife overall, plus a pair of emus that seem to be quite unphased by having people around and just wander around pecking here and pecking there.  Kangaroos are plentiful around here, but are a bit more wary about humans.  A mother and her joey seem to be very at home down our end of the park and there are several other adults as well.  At one stage I counted a group of seven kangaroos, happily munching.

The campground is next door to the local school, and the grounds are kept quite green for the kids to play on.  Even though there were some kids running around the school grounds the kangaroos did visit to take advantage of the greenery.

After a lazy start and a delayed breakfast and morning coffee, we went for a long walk around the camping grounds and the town of Wyandra.  We have actually stayed here before, 5 years ago.  At that time the free camp was full and there were no amenities, so we stayed at the small caravan park behind the general store/post office.  It was an interesting experience to say the least, but we were quite happy to be staying at the free camp this time.

Apart from the general store/post office/caravan park there is the Gladstone Hotel, which appears to have received a coat of paint since last time.  These seem to be the only businesses in Wyandra, and both would get a certain amount of business from the camping ground.  There is also a CMCA style dump point; a CFA/SES shed; the Powerhouse Museum (not open); a deserted service station; a church; quite a few dilapidated buildings; and some very nice buildings.  There are some relatively new walking tracks and even some exercise equipment for public use. 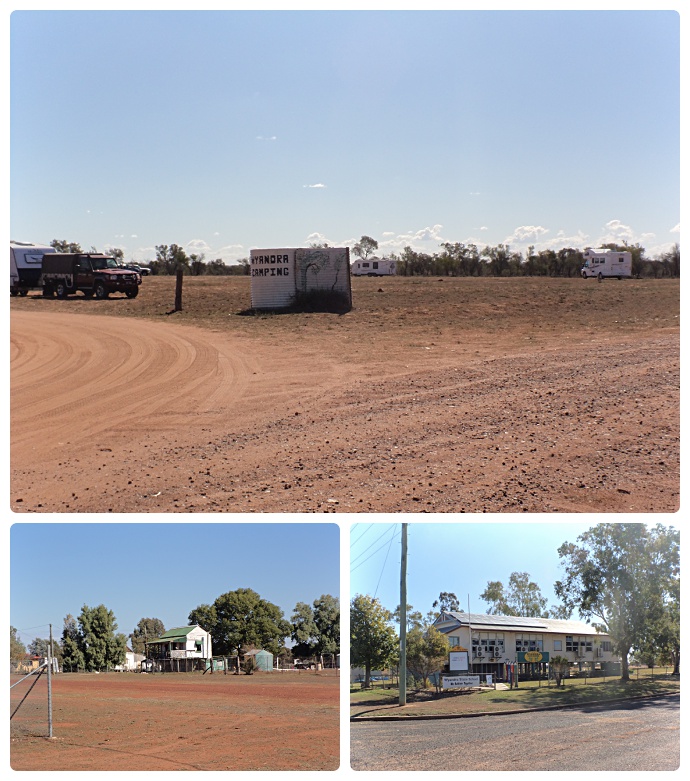 Like many country towns Wyandra is very proud of its contribution to the War effort, and there are some magnificent memorials to fallen service men and women.

Memorials to the Fallen in Wyandra

It doesn’t take long to walk around the main town area.

After our walk we returned to Bertha and lazily filled in the rest of the day reading outside.

Another one of Ann’s excellent Sunset photos