We woke to yet another day of sunshine and clear blue skies.  After packing up Bertha and farewelling our neighbours, we drove back into town to refuel and then headed back east along the Flinders Highway.  After about 14 kms we turned off onto the Landsborough Highway. 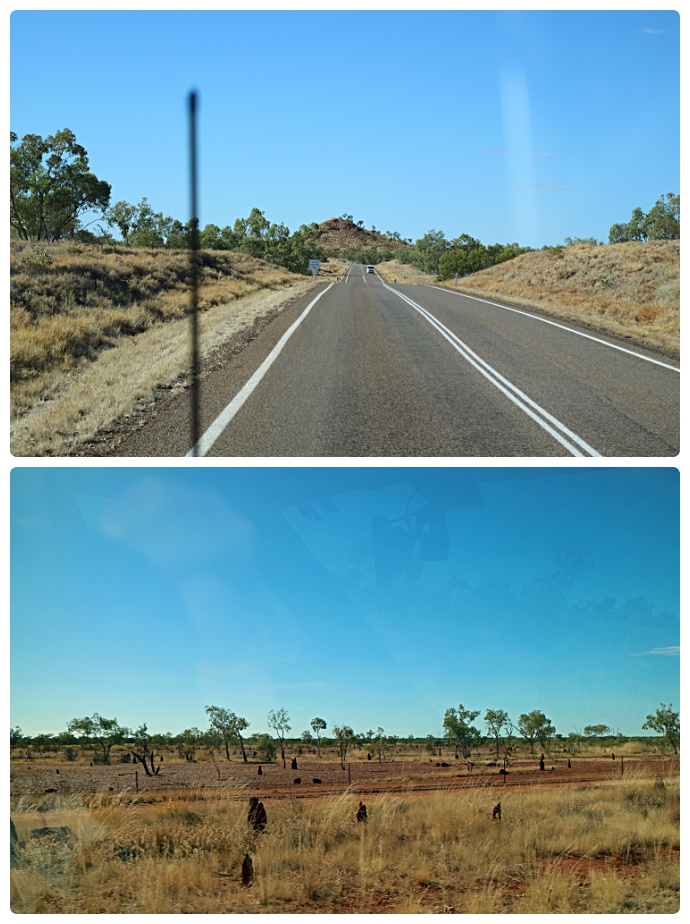 Scenes along the Landsborough Highway

Our first stop for coffee was at the Fullerton River North rest area (Camps 9 Q377).  This is a nice big area with shelter and toilets and tracks out the back where people had obviously camped quite recently.  This was despite a new sign which clearly stated that this was a heavy vehicle rest area only and that camping was prohibited.  It appears that the status has changed since Camps 9 was published in February this year. 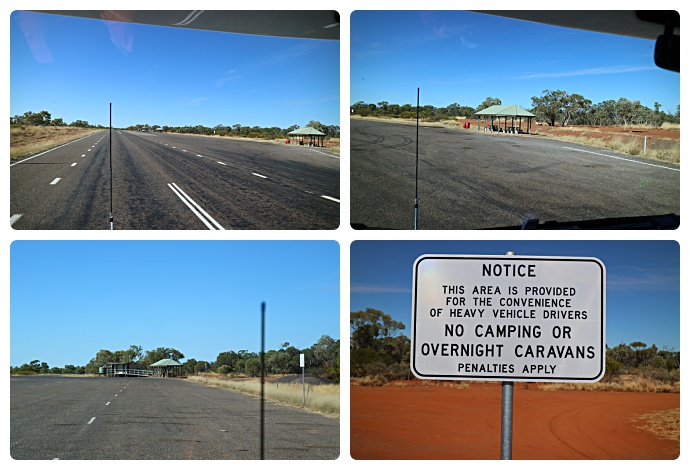 We continued down the highway to McKinley where we drove around town to have a look as the write up in the tourist brochures was quite impressive.  This is a small town with not a lot to offer other than the Crocodile Dundee pub (yes, another one) although to be fair there was quite a lot of work being down around town, with roads resealed, new parking areas prepared, storm water drains being renewed, and so on.  Perhaps the town has just received a grant of some sort?

From McKinley we drove on to Kynuna and stopped beside the Blue Heeler Hotel, where we had lunch in Bertha.  It was very hot by this time of day but at least we were cool and without flies in Bertha.  Apart from a pub and a roadhouse both with caravan parks there is not much else to see in Kynuna.

Not much to see at Kynuna

After our break we set off again and commented that this part of the country is still very dry.  All rivers and creeks are bone dry and none of the paddocks show much sign of green.  There is also a lot of roadkill – mainly kangaroos and smaller wallabies, and a few cattle.  This again seems testament to the dry conditions. Interestingly we didn’t see much sign of birds picking at the roadkill – we’re not sure how to interpret that one!

The other interesting thing of note is the amazing cloud formations we have seen today.  I don’t remember my schoolboy geography to be able to name what sort of clouds they are, but they are certainly interesting.  There doesn’t seem to be much sign of rain in any of the clouds though.

As we progressed down the highway we also noted considerable differences between the rest areas etc listed in the Camps 9 book, and the actual stops along the way.  We were heading to Q373 and found that it simply did not seem to exist.  There were, however, several truck stops not listed, most with new toilet facilities.  Q372, where we had thought we might stay tonight, also does not exist.  This would suggest to us that the local councils may have become less friendly to caravanners and motorhomers hoping to free camp for a night or more.  It is good, however, that they are providing more toilet facilities along the roads as not every traveller is self-contained and overall there are a good number of places where anyone can take a short break from driving (you just can’t stay overnight).

This meant that we had to continue the drive into Winton, where we had not booked any accommodation.  Winton itself was very busy and the more central caravan parks seemed very full.  We were able to secure an overflow site at the Matilda Country Tourist Park, where we have stayed before, which is a smaller park on the north end of town and could now best be described as ‘very tired’.  It will do for tonight.

We will have a bit of a look around Winton tomorrow morning before continuing on our journey.