Last night about 8.00 pm, in the dark, a large converted coach complete with trailer loaded with SUV and boat came rumbling in and only just missed some of the campers here before coming to a stop.  Two people got out and seemed busy checking something by torchlight.

This morning it seems that they have an electrical issue.  Typical traveller camaraderie, all the boys were out ‘helping’ with generators, battery chargers, etc – nothing like a project to create ‘male bonding’.

Male bonding at its best!

The winds picked up again overnight and rocked us to sleep.  We woke to clear blue skies and sunshine and wind again this morning.  Bertha told us that it was 11 degrees outside and 19 degrees inside at 7.30 am, so the cold problem appears to be solved leaving us with a wind problem.  Hopefully that will go away soon too!

We headed north past Newcastle Waters rest area/free camp, which was bituminised and had a toilet but was very close to the road and very crowded, even at 9.00am.  We are very happy that we chose the gravel pit rather than stay here.

Further up the highway we went past the Sir Charles Todd Memorial which also seemed to be a free camp, although it isn’t listed in Camps 9.  It looked to be better than the last place.

As we continued up the highway we were passed by 5 Trakmaster caravans in a row; we suspect that they were travelling together and had camped at the Memorial free camp.

We later stopped at the Dunmarra Wayside Inn for thermos coffee in Bertha, and topped up the fuel ($1.76 per litre). 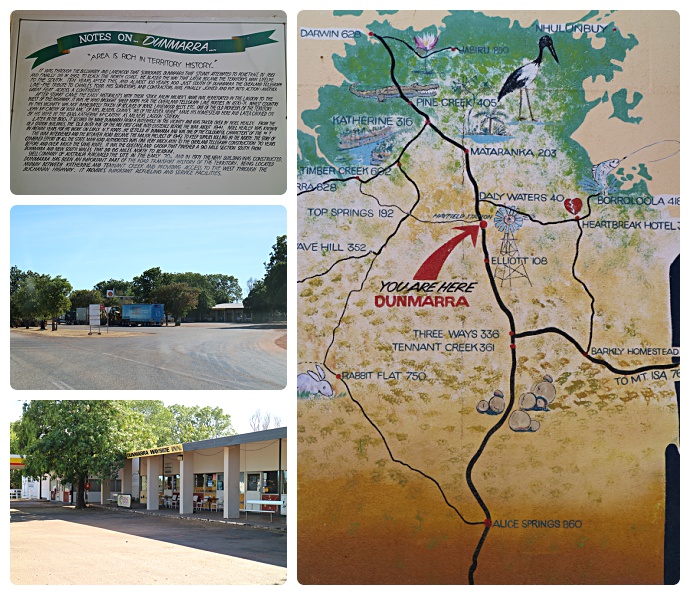 We timed things perfectly and arrived at Daly Waters Pub just before lunchtime.

The caravan park was starting to fill up even then, and the chap who took us to our site said that recently it had been chockers by 4.00 pm. This is an interesting park in that the vans are parked in rows, so in the morning you can potentially be stuck if the people ahead of you don’t want to move as early as you might like.  We’re second in the row so we should be OK. 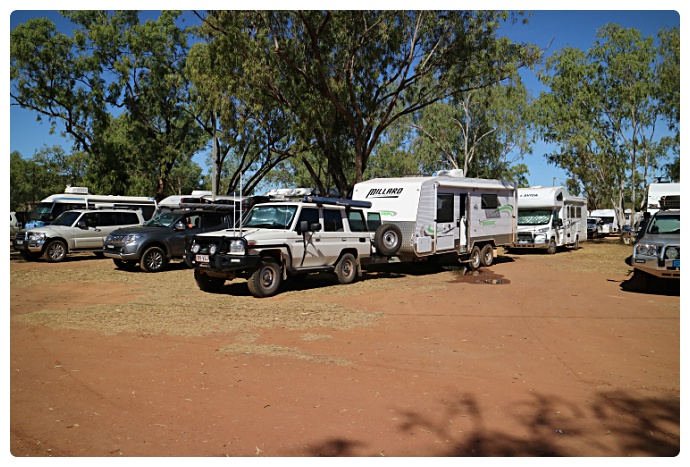 We were here in 2013 and most things haven’t changed much, although we did notice that the toilet facilities had been slightly upgraded and more toilet huts have been added.  They are all mini-ensuites and have a toilet, hand basin and shower, which is a nice change from most places.

Booking into the caravan park we also booked and prepaid for dinner.  We’re both looking forward to a delicious BBQ barra and salad dinner, and a few cold beverages.

After a very light lunch in Bertha we went for a walk around Daly Waters and the pub to explore.  This is certainly an interesting and quirky place!  There is a shop and a servo (of sorts) and there are other shops and museums under some of the old Queenslanders.

The township of Daly Waters

Caps, knickers and bras are all around the bar in the pub, and there was even a fire going despite the weather being in the mid/high twenties.  Our walk was so exhausting that we had to stop and have a cool drink in the bar!

Refreshed, we returned to Bertha for a quiet afternoon, saving our energy for dinner and entertainment tonight.

There is a For Sale notice outside the pub and apparently the pub and some surrounding shops etc is available for around $3 million.  This would be a great family business and way of life!

Daly Waters Pub has a great system – it worked like this.  Happy Hour was from 5.00pm to 6.00pm and the drinks were very well priced.  Entertainment started at 5.30pm and dinner was served in batches at half hourly intervals starting at 6.30pm.

So, like many others we headed over to the beer garden area around 5.00pm and ordered drinks.  The first entertainer, a country and western singer named Tom Maxwell, started playing at 5.30pm.  Tom comes from Tamworth and has been nominated for the Golden Guitar award 5 times, but has yet to win one.  The couple we were sitting with were from Horsham and we mentioned that had been at the Horsham Country Music Festival in March – it turned out that they were both country music fans and the wife, whose name I have forgotten, is actually a DJ at a Horsham radio station and hosts a regular country music program.  She knew Tom Maxwell and had several of his 13 CDs.  He played mainly original country music with a few covers – he was certainly very good and great entertainment.

We were in the first round for dinner at 6.30pm and were both served huge barramundi steaks and we were able to help ourselves at the salad bar.  Needless to say dinner was absolutely delicious.

At 7.00pm the second act came on.  He was ‘Stevie Still Rocking’ and we saw him when we were here in 2013.  Stevie sings mainly gentle rock ‘n roll, with the likes of songs from Ricky Nelson rather than the Rolling Stones.  Many of his songs invoked sing-a-longs with the audience and he had quite a few people up dancing. 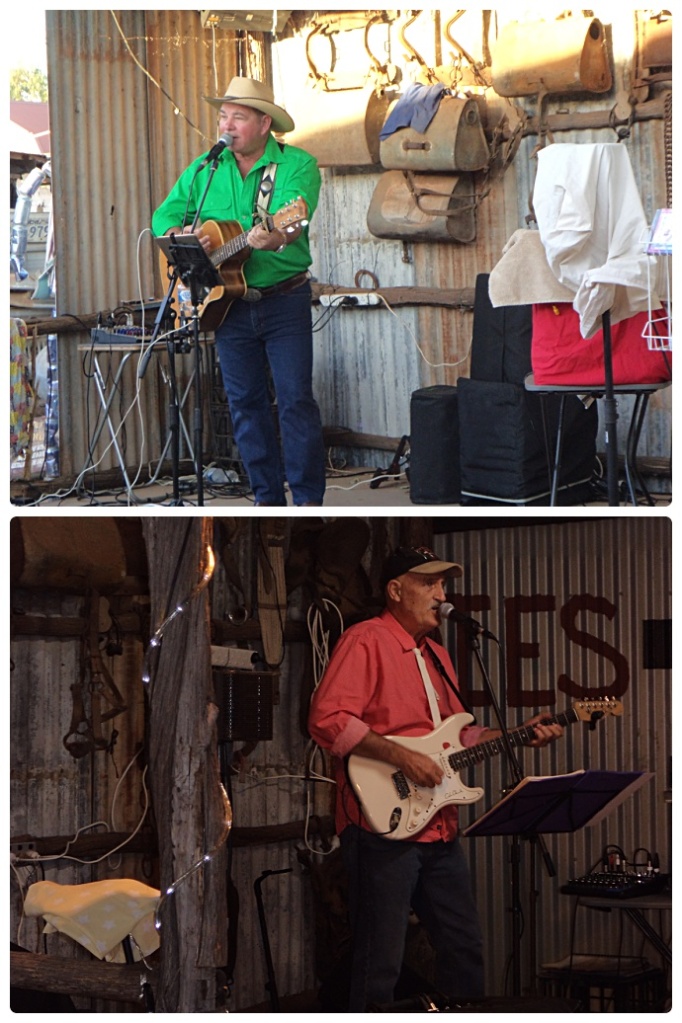 We didn’t have a very late night but we had a delicious dinner with a few accompanying drinks, enjoyed some great musical entertainment, made some new friends, and overall – it was great fun!