It was yet another glorious day as we got going early, packed up Bertha, our big car, and headed out to Uluru.

First stop was the Uluru-Kata Tjuta National Park Entry Station where we bought the minimum 3 day pass @ $25 per person. 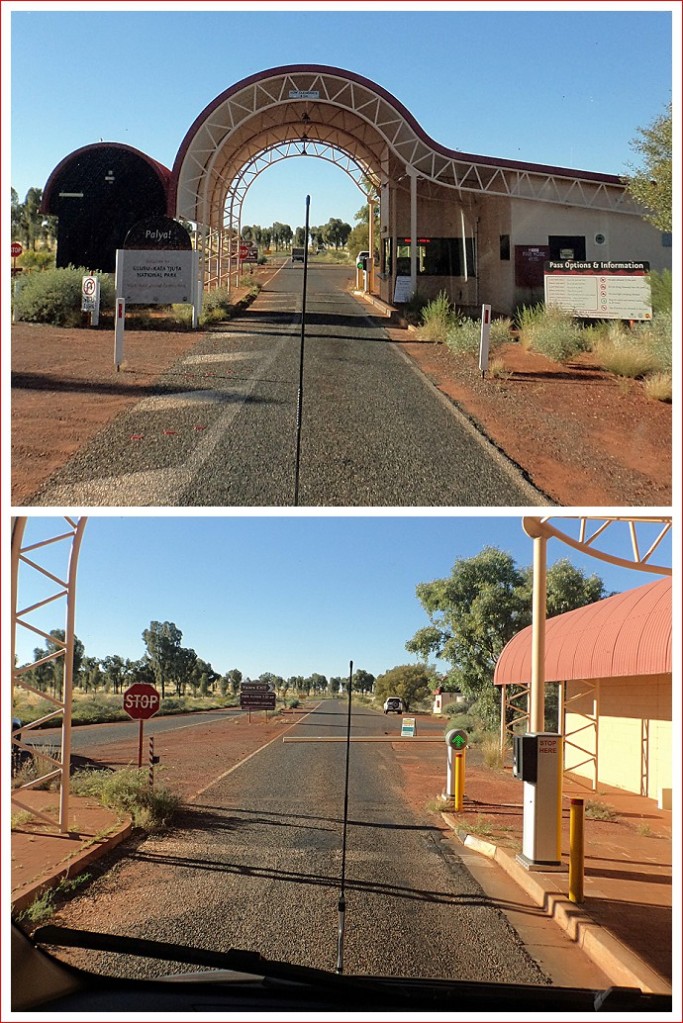 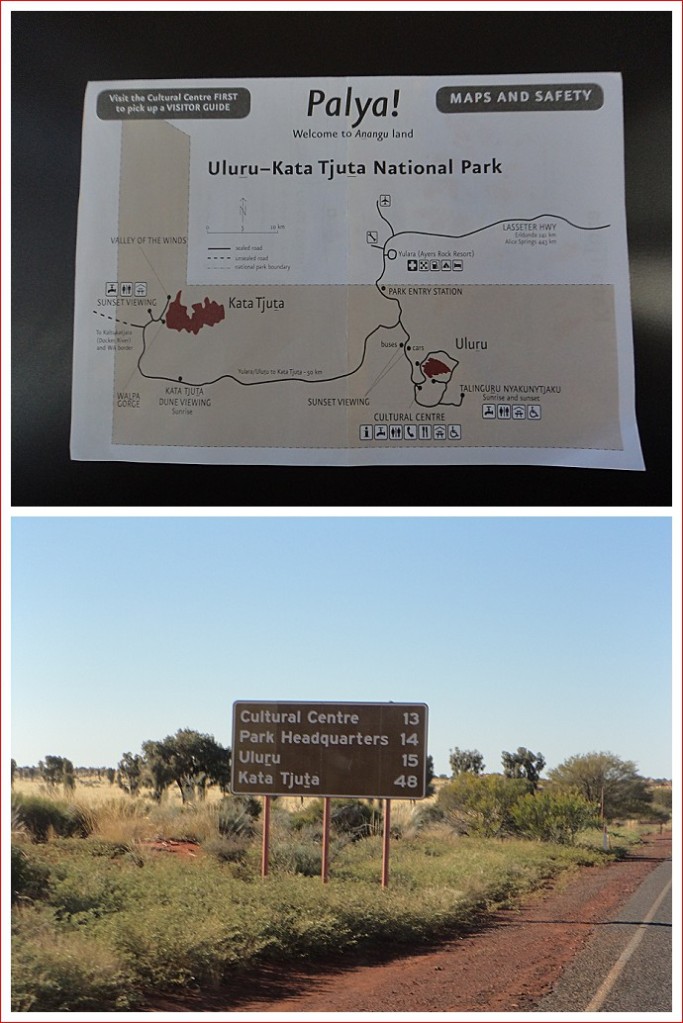 Our next stop was at the Mala Walk Car Park where we parked with the Long Vehicles and Buses.  Smothered in sunscreen and Bushman’s insect repellent we set off on the Lungkata Walk to Mutitjulu Waterhole. 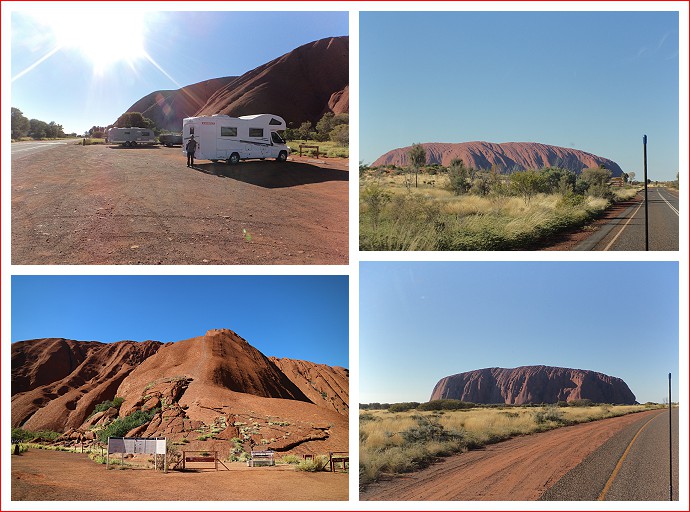 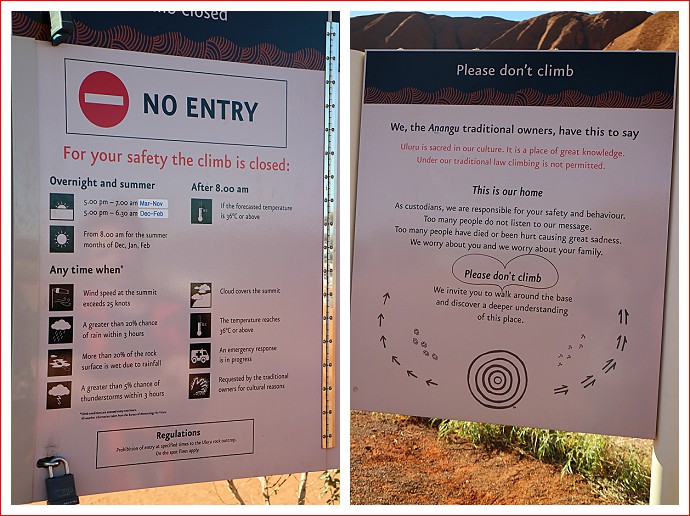 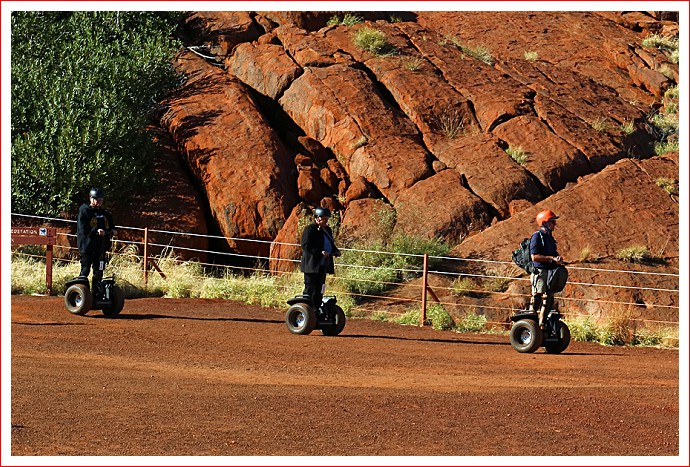 There are many different ways to tour around Uluru

Its 24 years since we last visited Uluru and there are some obvious changes.  Today the rock climb was closed because the wind was too strong.  There is a lot more signage asking that people do not climb the rock, although it isn’t forbidden unless the climb is officially closed for the day.  I did climb to the top in October 1993 but I wouldn’t do it again now, mostly out of respect for the Anangu traditional owners.  Plus I’m a lot older now!

History Fact: On 26 October 1985, title deeds to Uluru and Kata Tjuta were handed back to the Anangu traditional owners.  Since then the Anangu have been working with the Director of National Parks to jointly manage the Park.  During this time the park has been recognised as a World Heritage Area for both its natural and cultural values.

The walk was awe inspiring.  Whilst Uluru looks like a smooth single rock from a distance, up close there are sheets of rock coming off, large boulders, caves, cracks and crevices, and more – it certainly isn’t smooth.  It is however majestic and spiritual – there is no yelling and screaming here – people even tend to talk in whispers.  Interestingly, there is no litter either – another mark of respect for this sacred place. 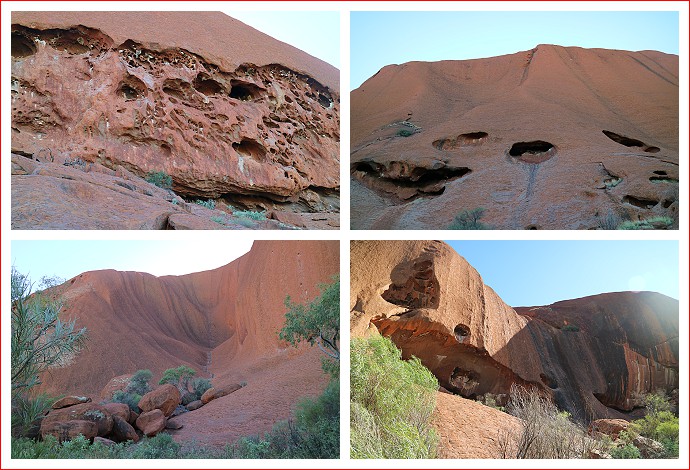 Our walk started in the shade but eventually the sun caught up to us and it became quite hot and sticky – and zillions of flies.  We did this walk 24 years ago but since then fences and barriers have been erected in places to keep visitors at a distance from the more sacred places.  There are more designated walkways and boardwalks and a lot more interpretive signs.  In other words its being more properly managed now.  Much of the area is under a revegetation program and places we went so long ago are no longer accessible and/or visible.  With recent rains Uluru is very green and there is plenty of long grasses and other shrubs and trees surrounding the place.  There is a surprising amount of vegetation growing on even the highest parts of the rock. 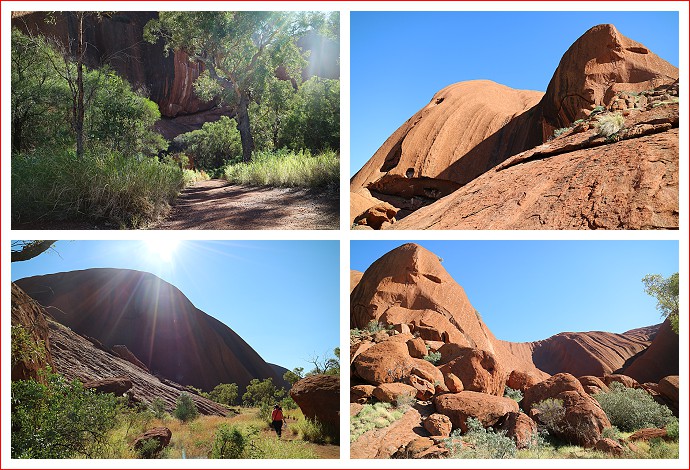 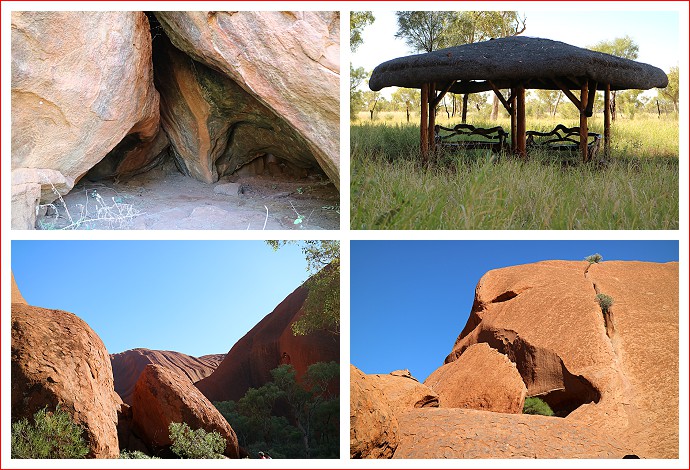 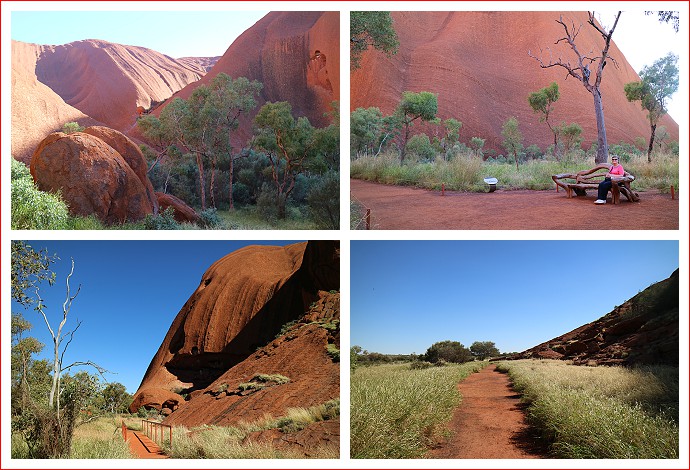 If you are planning to walk around Uluru, you do need to do a bit of forward planning as there are no toilets except at the car park and they are 300 metres away.  There are only a couple of spots where you can access fresh water so you need to carry your own with you.  The overall Uluru Base Walk is a loop of around 10.6 kilometres.  We walked to the Mititjulu Water hole and back, which was about 5 kms.

It was great to be able to return to Bertha where it was cool, we had toilet facilities, and we could have a good cold wash – red dust sticks to sunscreen!  We then had a light lunch in Bertha before heading off to the Cultural Centre. 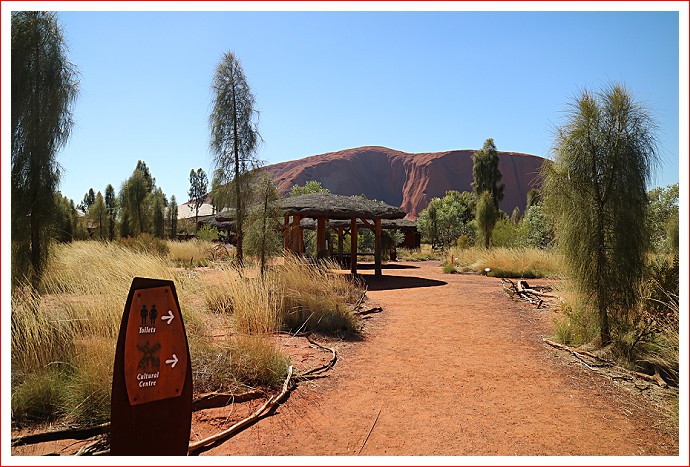 The Cultural Centre is a beautiful building made of mud bricks and natural timbers and provides a wealth of information about traditional Anangu people.  Unfortunately photos aren’t allowed.  We spent more time there than we should have – it was so fascinating.  There is also a gift shop and a cafe.  We were perhaps hoping for some traditional bush tucker but settled for a true blue Aussie lamington with our coffees.

It was then back to Bertha and head west on the 50 km trip to Kata Tjuta (The Olgas).

First stop was at the Kata Tjuta Dune Viewing Lookout.  After a considerable number of steps up a large red sand dune I came to the viewing platform.  This was to the only time that we could feel reasonably close up to Kata Tjuta and capture the size of it in a single photo. 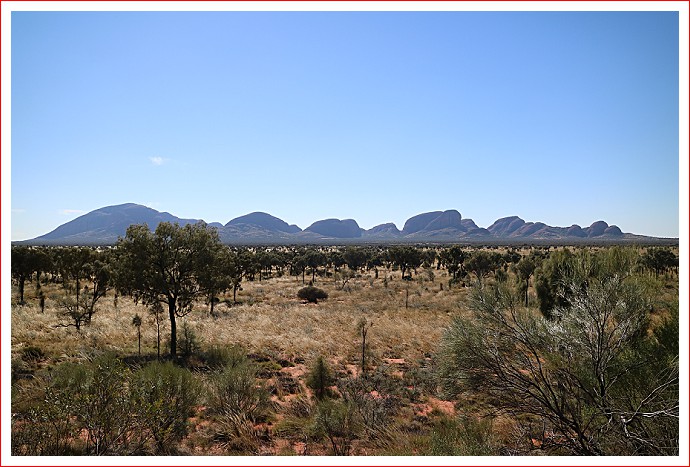 View of Kata Tjuta from the Dunes lookout

We then continued to the Valley of the Winds carpark and started up the very rocky pathway.  It was rough and difficult terrain and after what we estimated was about a kilometre, with a lot further to go, we retraced out steps and returned to Bertha.  Even though we didn’t make it all the way to the Karu Lookout, we still got up close enough to appreciate the size and majesty of this incredible rock formation. 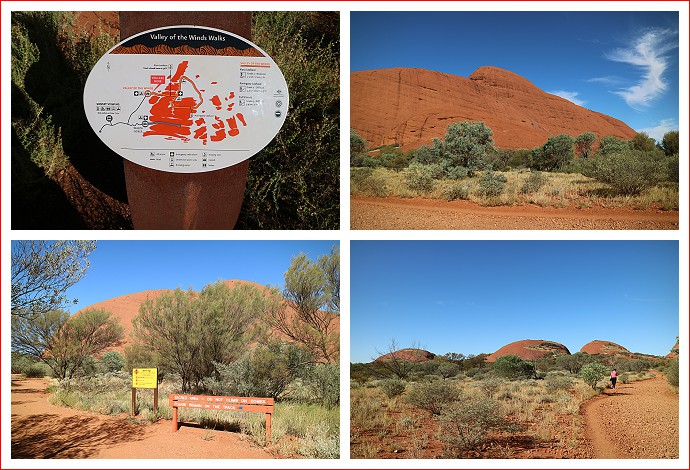 Start of the Valley of the Winds walk 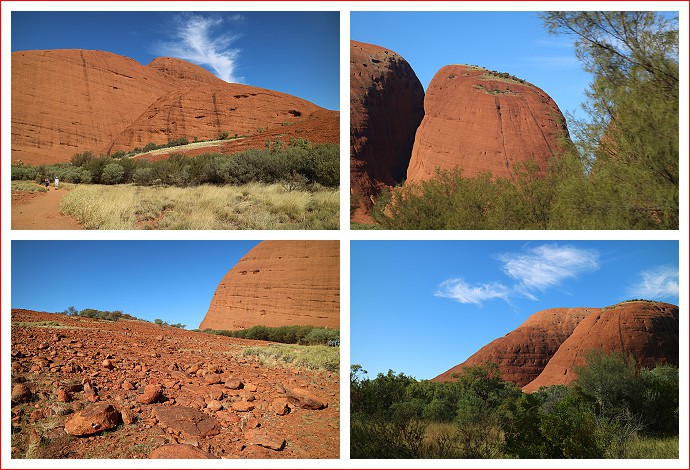 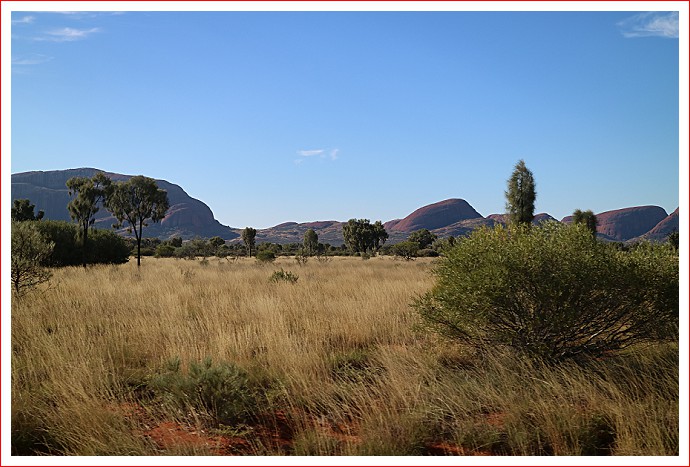 After a cool drink we drove to the Walpa Gorge Walk carpark.  We did this walk last time we were here and remember it as being very beautiful. However, today we were tired and there were busloads of international tourists to share the path with, so we decided against even attempting this walk today.

We then drove back to Ayres Rock Resort and set-up Bertha before collapsing in our chairs with a cold beer.

What a great day we have had!  We walked nearly 11 kms according to our fitness trackers and had great close up encounters with some of the world’s oldest and most majestic scenery.  Plus we learnt a lot more about this country and its traditional owners.

We were too tired to bother with cooking dinner so we caught the shuttle bus around to the Outback Pioneer Kitchen where we had a delicious meal and a glass or two of a very nice red.  Extra bonus was when a live musician, Stu Harcourt, came to the stage and blew us away with his song arrangements featuring guitar and didgeridoo. 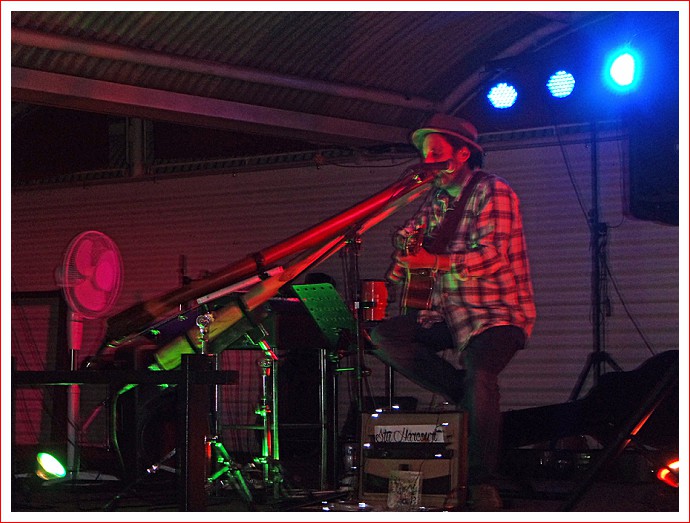