Yet another warm and sunny morning, with a little wind.  We mapped out a plan and packed up Bertha for a driving tour of some of the places we hadn’t been able to visit on foot.  First task was to top up Bertha’s water tank in the caravan park. 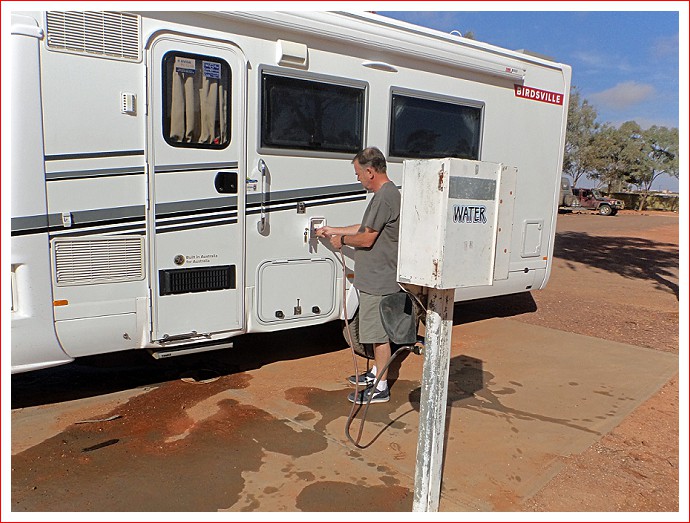 Starting point was “Boot Hill” – the cemetery.  It had a special feel about it with chairs next to some of the graves, lots of flowers and overall was well maintained.  Some of the headstones were very ornate whereas others were very simple and sometimes had only minimal information. 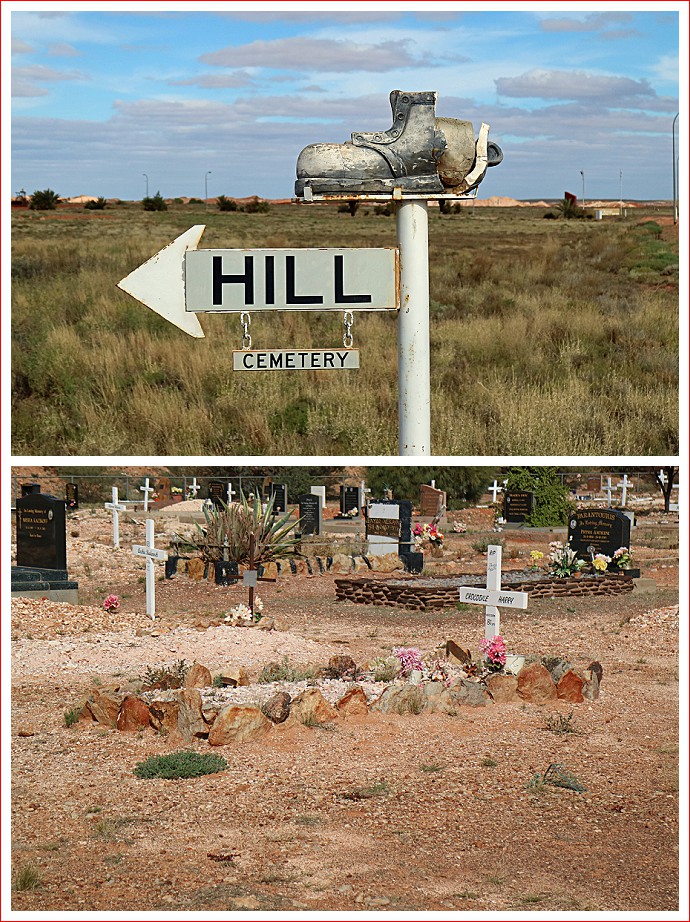 Nearby was the wind turbine which is apparently going to be closed down and a new solar and wind generation plant commissioned soon.  All surrounded by an interesting landscape.

From there we went to the Serbian Orthodox Church, which was truly amazing! 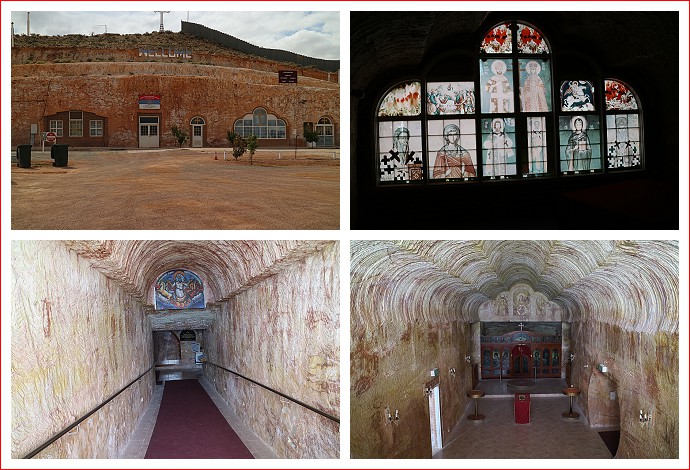 Coober Pedy has a massive number of underground mine tours, visits to underground houses, and so on.  We decided to visit The Old Timers Mine, which has a truly interesting story.  The mine was originally started in 1916, but for some reason it was filled in and not rediscovered until 1968 when an underground home extension broke through revealing precious opal.  The mine was dug out and a new walk in entrance added, but essentially the mine is as it was so long ago.  We took a self-guided tour, hard hats and all.  The search for wealth was sure a great motivator for men prepared to work in terrible conditions.  We were able to scramble around through the tunnels, and also through the family home.  Truly fascinating!  But we both commented that we couldn’t live underground like so many do.

Start of the Old Timers’ Mine Tour

Scenes inside the Old Timers’ Mine

Looks good in a hard hat!

Scenes from a display area 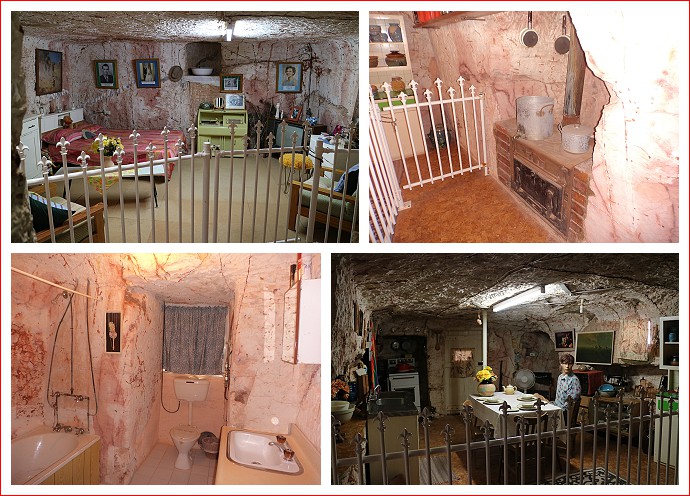 Some of the underground house rooms

By now it was lunchtime so we drove Bertha out to Seventeen Mile Road, near the speedway and shooting club where we found a nice big flat area to stop.  After lunch in Bertha we made a start at heading out to Crocodile Harry’s but the conditions were just a little too rugged for non-4WD Bertha – we needed the old BT50! 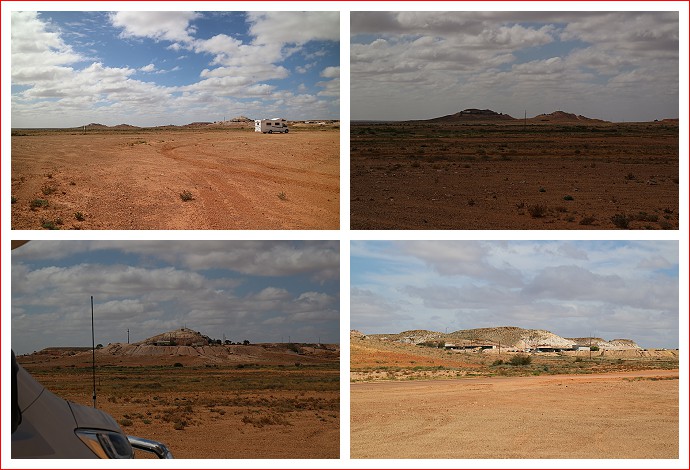 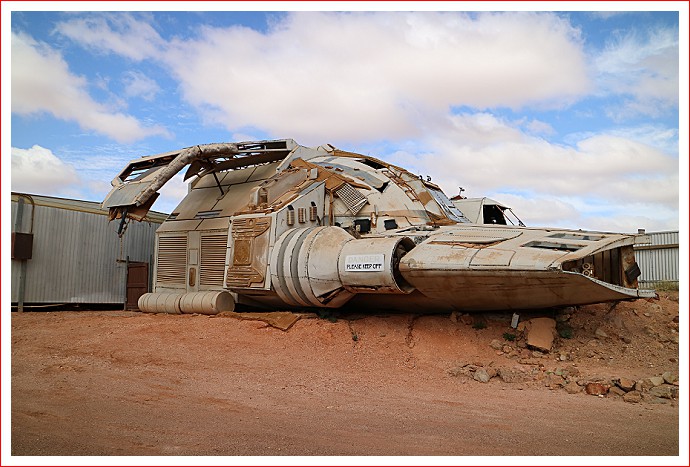 Which Galaxy did this come from?

The last major stop for the day was Coober Pedy’s oldest cemetery, which just seemed sad and eerie compared to Boot Hill.  Oz Minerals have funded the identification of all of the graves and there were markers had been made for those graves that didn’t already have them.  Some seemed really sad, for example Jim Hobbs died 2 October 1925 “At Rest” – I wonder if his family knows he’s there? Sad.

After all that activity we returned to the Opal Inn caravan park to absorb the day over a cup of coffee.

We really had a great day and as the Outback Bar & Grill had a wood-fired pizza night we decided to celebrate with pizza and beer.

We have really enjoyed our time in Coober Pedy!  The weather has been perfect, the people friendly and overall the place is very interesting.

Rather than a sunset to finish off with, here’s a Sturt’s Pea instead! 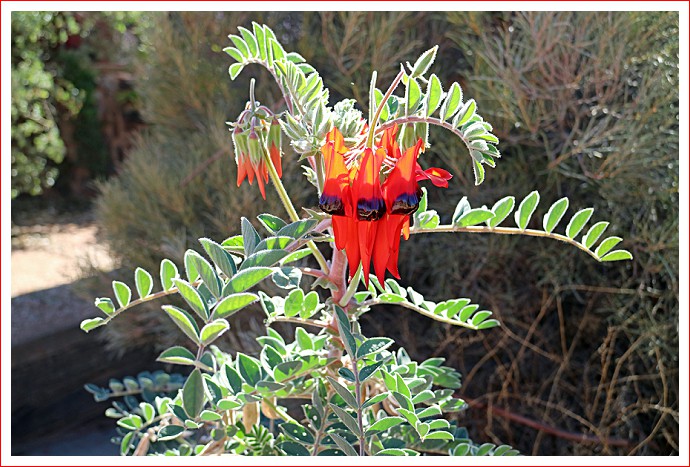 We’re looking forward to the next stage of our adventure and will be heading further north tomorrow.