It was definitely a day of rest today and we had nothing in particular planned.

We caught up on some housework, cleaning Bertha after driving through rain, and spent several hours just relaxing outside with our books.  Highlight of the day was lunch at the Paringa Pub.  When we arrived we were the only customers there but quite a number of other people did arrive a little later and we all had a great time.  Ann had the roast of the day, which was duck, and she enjoyed it very much.  I had a delicious home-made pasta and sauce.  Lunch was accompanied by a very nice drop (or two) of local Angove Merlot.

The weather forecast on the evening news didn’t look too good!

Today we had originally planned to catch the local Amazon Bus service to see some of the local sights but we both seem to be suffering from head colds and decided not to inflict ourselves on other bus passengers.  Besides, there is rain and possible thunderstorms forecast for some-time today so we decided that staying close to Bertha would probably be a better idea.

We did wander over to the Paringa Bakery & Café and thoroughly enjoyed our coffee and cake.  From there we went on a good walk around Paringa to check out some of the local attractions.

First stop was the famous Black Stump, which is actually just across the road from the Bakery.  There are apparently 11 Black Stumps around Australia and Paringa is very proud that theirs is the biggest.  It is 8 metres in diameter, weighs 8 tonnes and is an estimated 600 years old.  It was found some 50 kilometres away and has been in its current location since 1984. 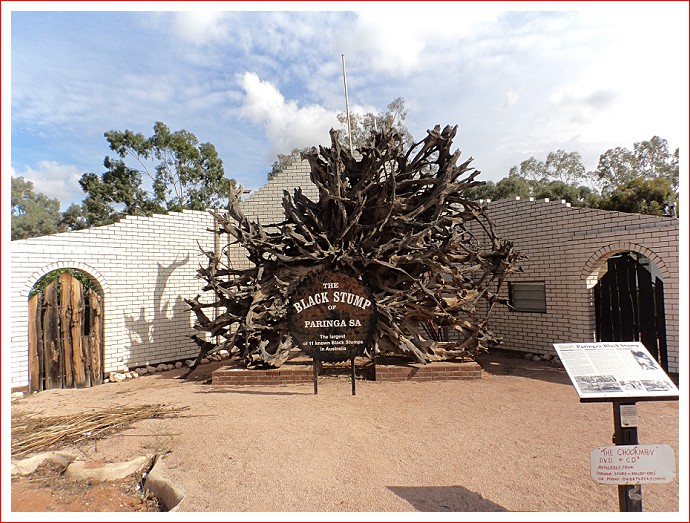 From the Black Stump we walked past the local Paringa Community Museum which house various local artifacts and farm machinery from the area.

We couldn’t exactly miss the Paringa Lifting Bridge.  The bridge was opened in 1927 and was one of the earliest bridges to span the Murray River.  Part of its significance is the section which can be raised to allow the passage of river boats.  The lifting span is still raised twice a day, depending on river traffic – bookings are required.

Next to the bridge is a community park which is currently being upgraded.  There are sweeping lawns where several families were enjoying picnics.  There is a nice rotunda for a bit of shelter (not sure if a brass band ever plays there).  We noticed several canoes out on the river.  Looking along the river banks we could see the start of what we are pretty sure is the Renmark Big 4 caravan park.

Canoeing on the river

Walking back from the bridge and park we stopped at Cammies Antiques and Collectibles which had an amazing collection of old and interesting treasures – but we are past buying stuff like that anymore – interesting to look.

From there we picked up some lunch supplies at the bakery and headed back to Bertha for lunch.

Just as we were finishing lunch outside we felt the first drops of what we thought was the approaching rain.  Shade cloth wall and awning were immediately packed up before they got wet and we retreated with chairs inside.  The rain only lasted 30 minutes and we’ve had only light sprinkles ever since

Rain and thunderstorms are still forecast for today.  Tomorrow’s weather looks a little better and we plan on heading off towards Port Augusta.