The sky was clear blue and there were a few clouds about when we woke up, but it was several degrees cooler than we had become used to.  Looking at the weather charts it looks as though we are going to have get used to that!

Packing up was again straight forward and we turned right from the Kingaroy Showgrounds onto Bunya Highway and headed off.  It wasn’t long before we hit roadworks and sat dead still for what seemed like an eternity, but in reality was probably more like 15 minutes.  We were at the head of the queue but there were a few big trucks lined up behind us so we pulled over when the sign was turned from Stop to Slow and let them go through.  They were in a hurry but we weren’t!  Then it was slow going at 40 kph for several kilometres over fresh bitumen – don’t we all love that?  Once we finally got going at highway speeds Bertha developed a worrying sound from one of the rear wheels which called for immediate investigation.  I can’t actually claim to have done anything specific to make that sound go away, but it did as soon as we stopped, so we could finally continue.

Actually by now we really needed a cup of coffee, so we stopped for thermos coffee in Bertha in the small village of Kumbia. 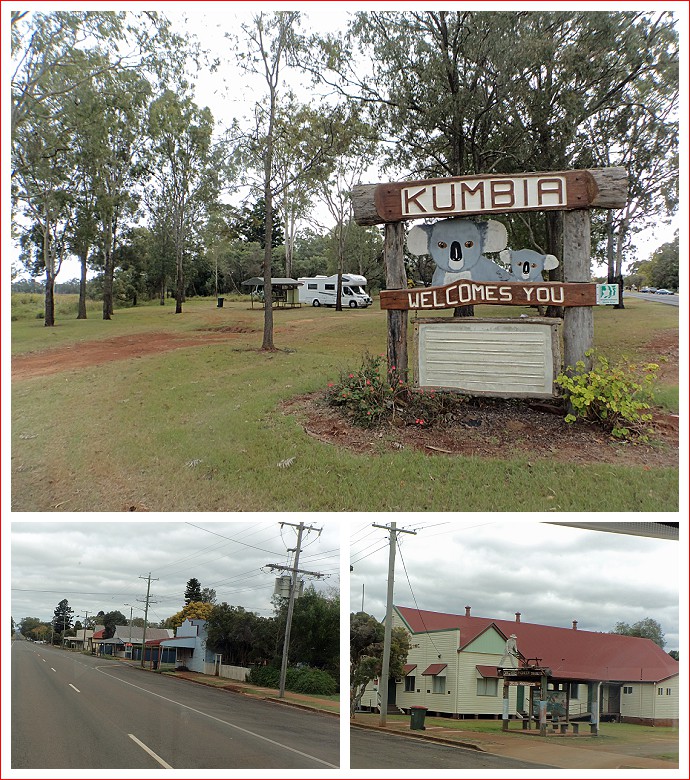 Rested and refreshed, we continued down the highway through interesting and varied scenery and a few small villages until we reached Dalby.

We came through Dalby but from a different direction on the way “up” so it was interesting to see things from a different perspective.  Hoping to catch up a bit of time we had a quick lunch in Bertha but then went for a good walk around Thomas Jack Memorial Park.  This is a great park supported by the community which includes open grassy areas, colourful flower beds, winding paths around a water feature with a small bridge, a large playground for the kids, and clean public amenities.

At Dalby we changed from the Bunya Highway to the Moonie Highway, towards Moonie.  The terrain changed a bit around Dalby, with more flat land; some areas were under crops, others still only partly cleared, and we were surprised to see a considerable volume of water along the sides of the road.  We also encountered lots more trucks, including tankers, road trains, and other large vehicles. 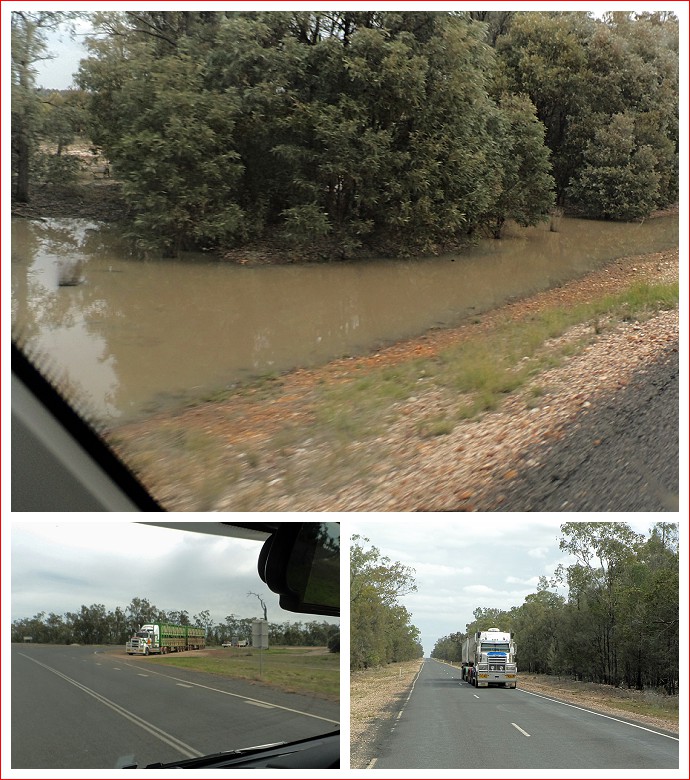 We stopped at Moonie for a quick stretch of the legs, and a cup of coffee.  There isn’t much to Moonie at all other than it’s the intersection of the Moonie Highway and the Leichhardt Way, and a very busy intersection it is.  There’s a pub, a tourist information centre and post office, a motel, and a large gravel area for trucks, caravans and motorhomes to park.  We got talking with some fellow travellers and they felt, as we did, that the lack of rest areas along many Queensland roads was a real safety issue, especially with so many trucks in a hurry sharing roads with often much slower caravans and other vehicles.

The Leichhardt Way, however, is an “A” class road and the situation was somewhat improved with truck stops every 10 to 15 kilometres.  However, unlike Victorian rest areas, the Queensland version is usually an extra strip of bitumen along the side of the road, and none have toilet blocks.  Again, along the Leichhardt Way we were confronted by large and unusual vehicles, water along the road, and different types of vegetation. 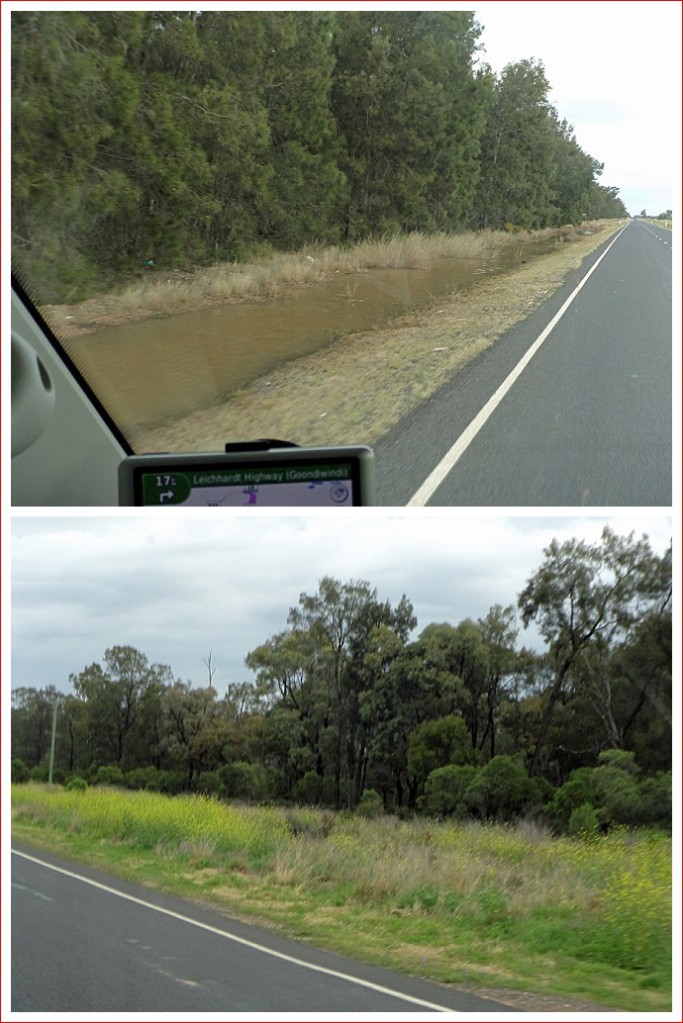 We finally arrived at Goondiwindi, along with some of the trucks, and took the “scenic route” to the caravan park.  There are some beautiful old buildings and structures in Goondiwindi and we will hopefully have time tomorrow morning to view more of this very nice town. 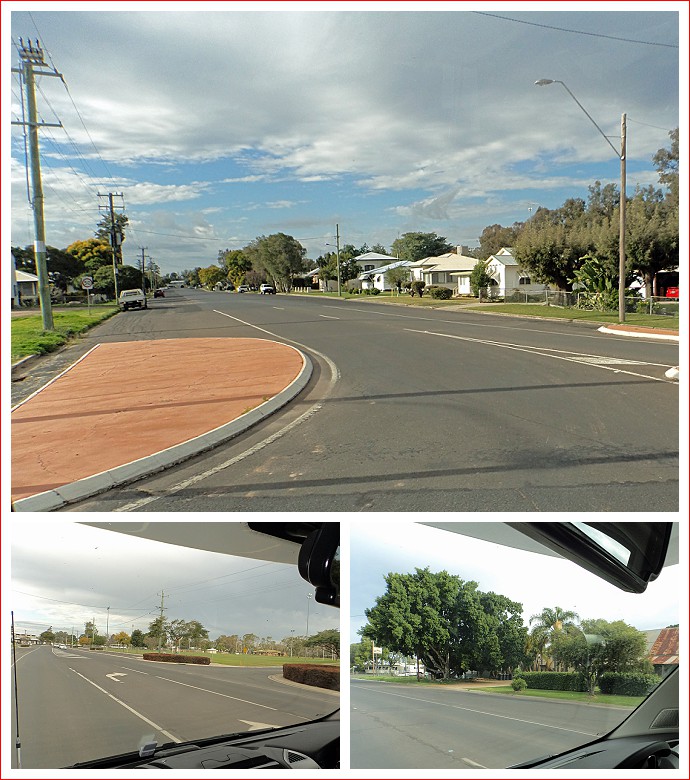 Eventually we arrived at Goondiwindi Holiday Park and got set up on our site.  This is an older but very clean and tidy park with plenty of sites.  The amenity blocks are “ensuite” layouts with each individual unit containing shower, hand basin and toilet.

Once set up we went for a bit of a walk and discovered a rather neglected Trailblazer 5th wheeler, which we thought was unusual.  There were a number of bbq/camp kitchen areas, and also a larger fire pit area where community sausage sizzles are held with proceeds going to charity.  As I was trying to clean some of the bugs and tar off Bertha a fellow traveller came over and asked if he could borrow my motorhome key.  It turned out that he has a Winnebago Airlie and had somehow locked his keys inside.  He was hoping that the keys to our motorhome might fit his.  They didn’t!  His next option was to call the RACQ to see if they could help.  I wished him luck. 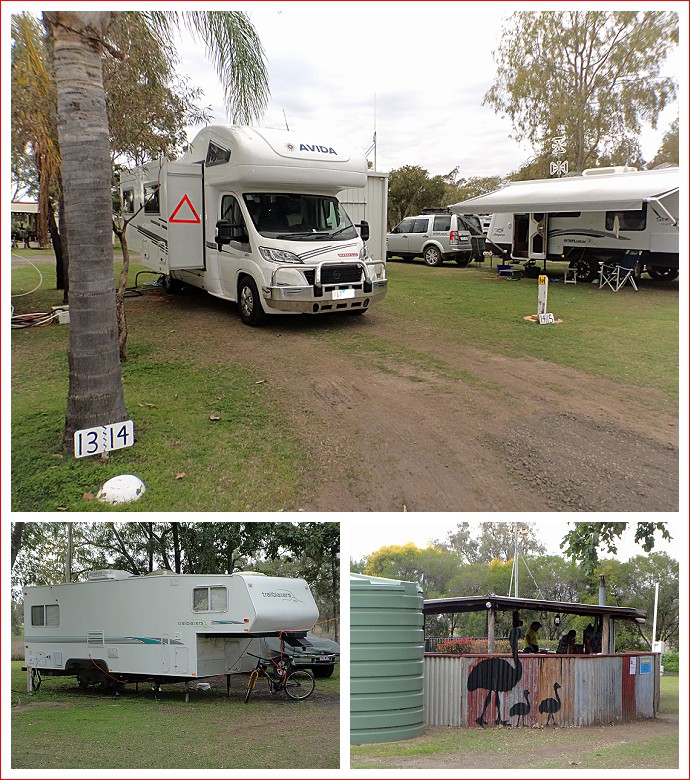 Today was another great day and the weather was still pretty good.  Still living the dream!