Ann and I both slept very well last night. There was no rain and no howling winds and, as we realised later, no children and no slamming doors of Hippy/Wicked style campervans. This caravan park is a great place for grey nomads.

As we hadn’t unhitched the van from the Ute, packing up was a pretty quick matter, so we were back onto the Bruce Highway quite early.

Leaving Maryborough, we were surprised that there was still a lot of sugar cane, but it did disappear the closer we got to Gympie, out first stop for coffee. We pulled into the Lake Alford Recreation Area on the south end of town and what a nice spot to stop this was! The lake itself is well maintained and has fountains, bridges and seating. There is plenty of wildlife in the form of ducks, ibis and other water birds. There are also amenities for travellers and other historic attractions in the area. On the highway is a large statue commemorating the early gold miners of Gympie. 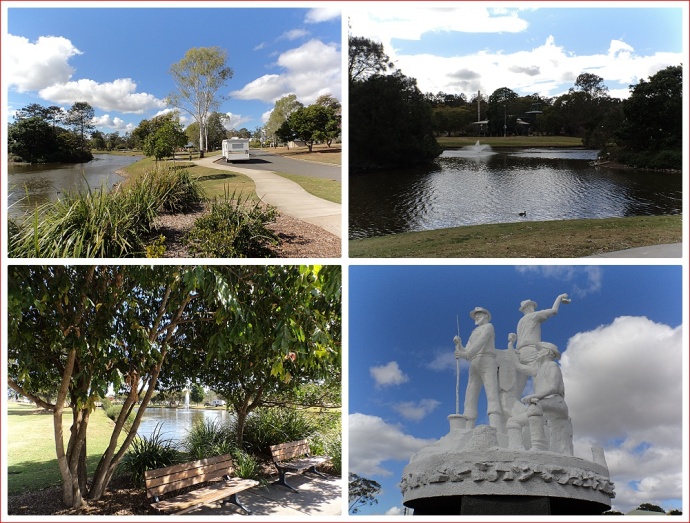 From Gympie we continued down the Bruce Highway which as highway A1 has a maximum speed limit of 90 kph. At one point in becomes the M1 motorway with dual lanes and a speed limit of 110 kph, and then reverts back to the single lane A1 at 90 kph. Very confusing! Then, as we came closer to civilisation it reverted back to the M1 and it continues in that mode all the way into Brisbane. 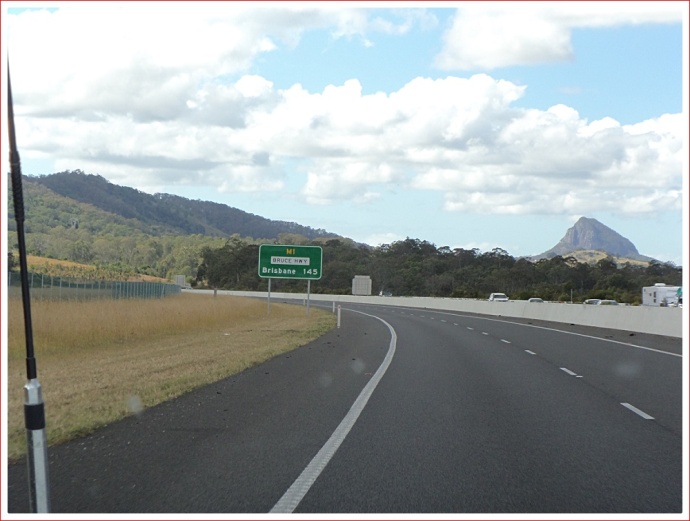 However, as we commented previously, there are some massive roadworks going on along the Bruce Highway. As frustrating as it can be to have to travel at 40 kph at times and to have to drive on newly laid bitumen, the improvements will be massive and will make driving on the highway much safer and more pleasant.

Roadworks on the Bruce Highway

Major roadworks on the Bruce Highway

Just before lunch we reached our destination at the Big4 Forest Glen Holiday resort, just out of Maroochydore. Ann had tried to book a site at Cotton Tree where we stayed last year and where friends of ours are staying, but nothing was available and this park seemed like a good alternative. Unfortunately we had a bit of a problem as someone had changed the site we had originally booked and we couldn’t fit on the replacement offered. Eventually they did find a site that we could squeeze onto, although Andy from the park had to assist us onto the site.

At this stage we weren’t totally happy with the world in general so after a quick lunch we headed out to the nearby Kunara Organic Marketplace. It was quite amazing. There is a huge organic food store, an organic butcher, a small clothing shop with hemp, bamboo etc style clothing, an organic café and a garden centre. The entire place was packed! We had a good look around and enjoyed very nice coffee and non-fattening cake at the café before returning to the Ute. We then drove a short way to the Forest Glen Shopping Centre and had a look around there as well. Ann enjoyed her visit to the Patchwork Angel quilting shop. 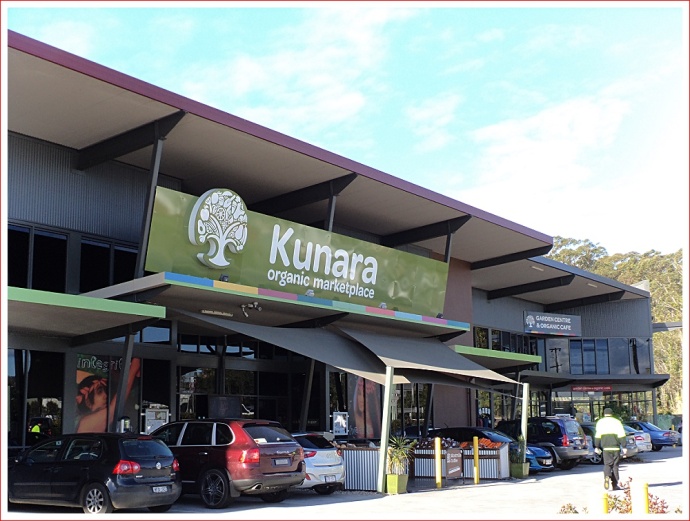 Feeling a lot better we returned back to the caravan park, hitched the van onto the Ute and made a few adjustments to our set-up and unhitched. Now we were feeling a lot happier! This is an older park built on a slope and many of the sites were not designed with big rigs in mind. Still, our site is reasonably flat, unlike some of our neighbours who almost seem to be perched on stilts.

Not all sites are level – look at our neighbour!

For dinner we got our glad rags on and went to “Jampa’s Spirit of Tibet” traditional Tibetan restaurant which is a separate building in the grounds of the caravan park. Ann had a Tibetan Beef Curry and I had Rashhi Ngu-Tse, which is a goat and spinach curry. Both our meals were absolutely delicious and we will be coming back here another night.

We will be staying in Forest Glen for at least a week and may not post daily entries to the blog while we are here.