We woke to another beautiful day and decided to go for a drive South to Ayr and Home Hill. We had driven through this area last year and thought that it warranted a longer visit this year.

Leaving Townsville, the landscape was mainly flat with mountains in the background. At one point we appeared to cross through salt plains, although there may be another explanation. There were some signs indicating that some University research studies were in progress in the area. 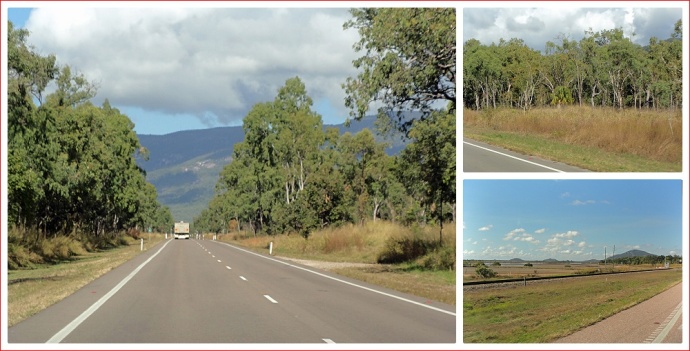 Scenery on the Way to Ayr

The vegetation soon turned to sugar cane and mangoes. The Burdekin region, of which Ayr and Home Hill are the two main towns, is the largest sugar producing region in Australia and produces around 1.3 million tonnes of raw sugar each year, which is about 25% of Australia’s total sugar production. The Burdekin region also produces around one third of the mangoes in the Australian market. With 300 days of sunshine each year, rainfall of about 1 metre and average maximum temperatures of 25 and 32 degrees in winter and summer respectively, it’s no wonder that growing conditions are so good for these and other crops, including capsicum, melons, zucchinis, rice, and more.

Mangoes and Sugar Cane on the way to Ayr

Upon arriving in Ayr, we immediately set about finding somewhere for coffee and a light lunch. We ended up at the Chill Lounge, where the coffee was great, food was delicious, and prices were great value. And the service was pretty good as well. Several insightful sayings were displayed in the café, including:

A yawn is a silent scream for coffee

Children left unattended will be given an espresso and a kitten. 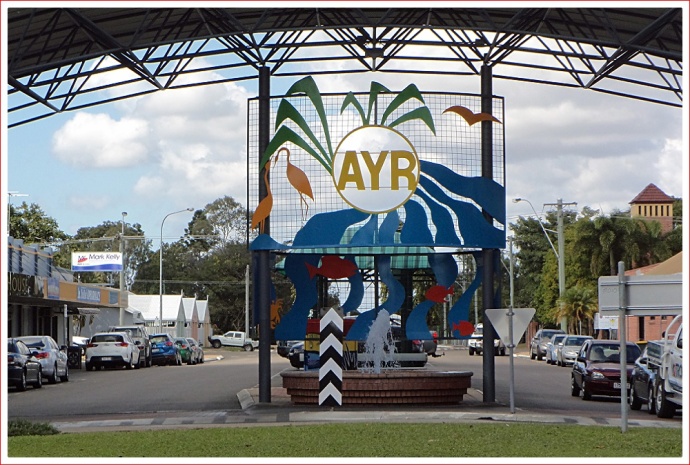 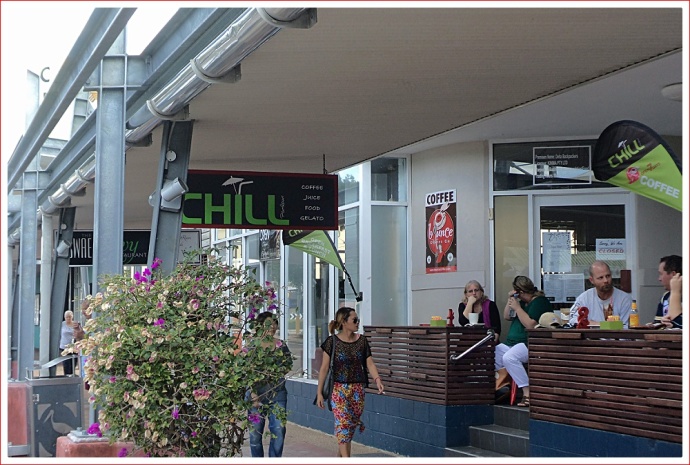 Once our appetites were satisfied we went for a long walk around town. The Tourist Information Centre is a quaint cottage in Plantation Park, and the volunteer on duty made sure that we went away armed with plenty of maps and brochures. Also in the Park is a 60 metre long sculpture of a giant carpet snake, Gubullamunda, which was constructed to celebrate and promote indigenous culture in the region. 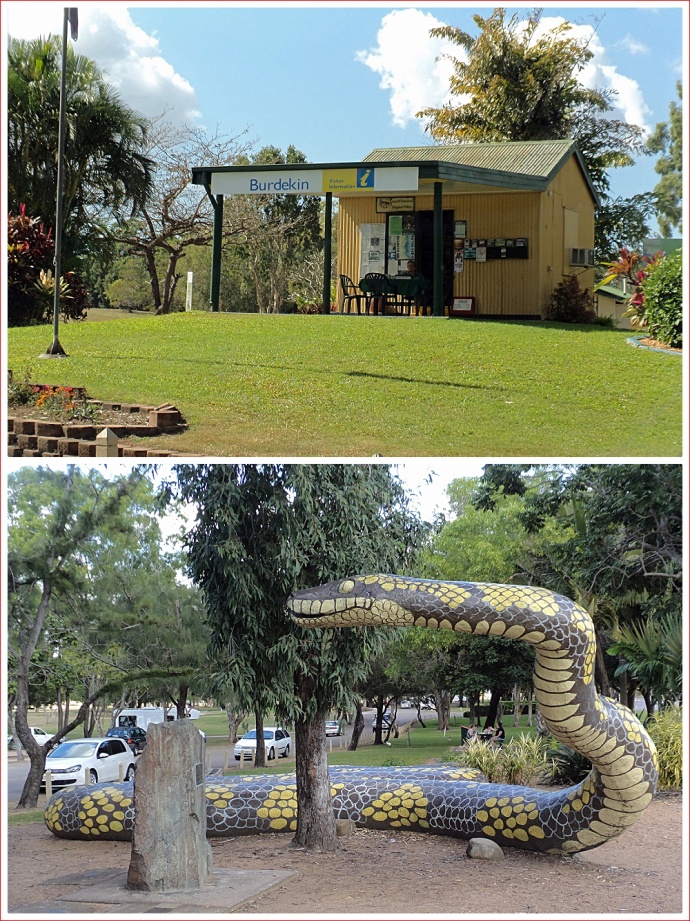 There are some very interesting heritage buildings in Ayr, and we were particularly impressed by the Ayr Town Clock which was unveiled in 1930 as a tribute to sugar industry pioneer, John Drysdale. The Ayr Post Office also caught our attention. There are several hotels in town, as one might expect, including the Queens Hotel where we stopped for a cool drink before continuing on our walk. It was 30 degrees at the time!

In front of the Burdekin Theatre is the granite and bronze “Living Lagoon Sculpture” opened in 1985, which pays tribute to native flora and fauna and recognises the importance of water to the Burdekin community.

Elements of the Living Lagoon Sculpture in Ayr

Having seen a fair bit of Ayr on foot, we returned to the Ute and drove some 12 kms to Home Hill, crossing the Burdekin Bridge over the Burdekin River in the process. This bridge – known as the “Silver Link” – is a vital transport link between north and south, particularly in the wet season when the river can swell by up to 11 metres. At 1,103 metres long it is longer than the Sydney Harbour Bridge, Brisbane’s Story Bridge and Newcastle’s Hawkesbury Bridge. It took a decade and $6 million to build, and was officially opened in June 1957. Built to withstand the highest known flood at the time, it has never gone under water. Driving across the bridge in the dry still highlights how wide and deep the Burdekin must be during the wet season. 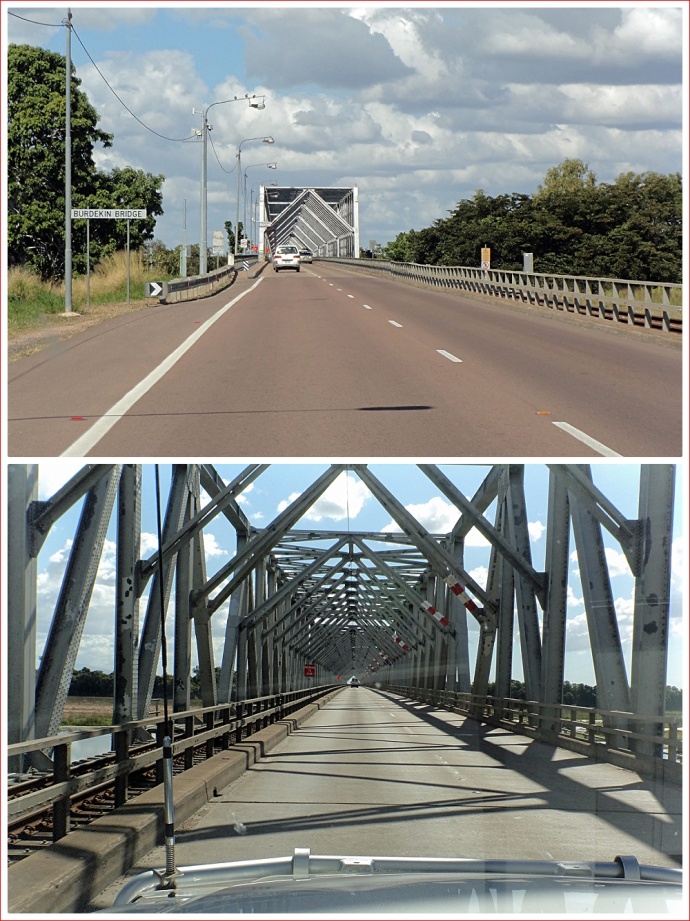 View from the Burdekin Bridge

Several kilometres from the bridge is the small town of Home Hill. It’s an interesting place and one of its better known landmarks is the Comfort Station where travellers have free access to showers and toilets, and is very popular with caravanners and others travelling along the Bruce Highway. There are a number of heritage buildings, including a couple of old pubs, and a beautiful Queenslander style Post Office. 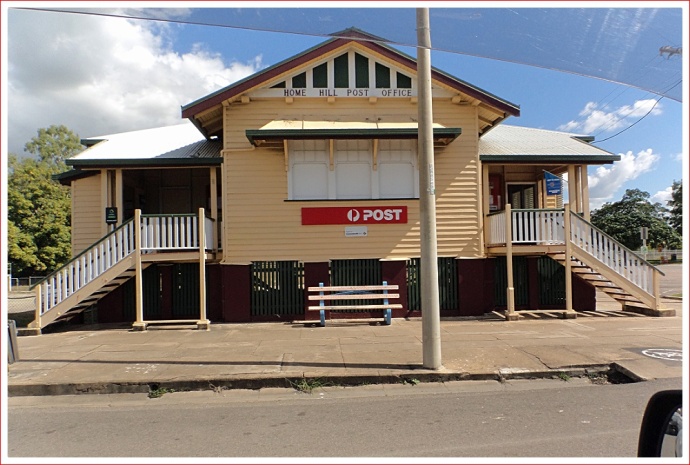 Once we’d had a bit of a look around Home Hill we headed back across the Burdekin Bridge and back home to the caravan.

We enjoyed our day trip to Ayr but really only scratched the surface of what the town and the wider Burdekin region have to offer. We will have to come back again, and maybe stay longer next time.