Today was the first day this trip that I have worn shorts!

The day started at about 6.00 am when a flock of kookaburras started laughing to herald in the new day. However it was still too dark and too cold so we pulled the doona up and stayed in bed a while longer. The absolute darkness and serenity here ensured that we had a great sleep!

We eventually got moving and after breakfast packed hats, sunscreen, water bottles, snacks and cameras and headed off in the 4WD Ute to explore Carnarvon Gorge.

First stop was the visitor information centre several kilometres away along the gravel road where we had a good look around the displays, including a 3D model of the gorge. As this is a National Park there was a very knowledgeable Ranger on hand to assist with any queries and the displays were very informative. There was one couple we met who were doing a quite long walk and were going to camp out overnight. They were a lot younger than us!

As neither of us has a lot of experience in bush walking, we decided to try to stick within our limitations so our first trek was the apparently reasonably sedate “Nature Trail”, which is a 1.5 km walk, mainly along the creek. That may be the case but it started out with a water crossing and included several more as we went on. It was a beautiful walk through almost tropical forests with a huge diversity of plants and we took lots of photos. It was also extremely peaceful – there is certainly something special about walking alongside moving water.

After a snack and a rest back at a park at the end of the Nature Trail, we decided to forego the main and most spectacular walks and returned to the Ute and headed back down the road to the Mickey Creek Gorge car park. As the Ranger had explained last night, there are actually two different walks accessible from this track so we had a couple of options.

Fellow adventurers will know all about these adventure walks. First they suck you in with a nice flat, wide path and you really enjoy yourself. Gradually, however, the track gets narrower and the terrain gets rougher, and almost before you know it you’re scrambling along goat tracks and climbing up steep steps to an unseen destination. Then they get you with the water crossings where you have to guess which one is the wobbly stone they deliberately put there for their amusement.

Thus it was with the walk to Mickey Creek Gorge. Never-the-less, we continued as the scenery was absolutely spectacular – it can never be successfully captured in photos although we did take plenty. There are sheer sandstone cliffs and huge boulders with tall trees of every description plus ferns and other plant life. In some places the sun shines through and in other places you are walking completely in the cool shade. There were narrow tracks and steep steps and quite a few water crossings – neither of us got a foot wet or dropped anything in the water.

Before heading to Mickey Creek Gorge, we took the alternative track to Warrumbah Creek Gorge, which the sign said was only 200 metres away. It was a great walk but the 200 metres was only to the end of the official track – we were on our own from there. We did make some progress but it was getting too difficult to continue so we turned back and took the trail towards Mickey Creek Gorge. The sheer majesty of the scenery was amazing but again we reached the end of the official track and decided not to push ourselves too hard to get to the eventual end of the gorge. 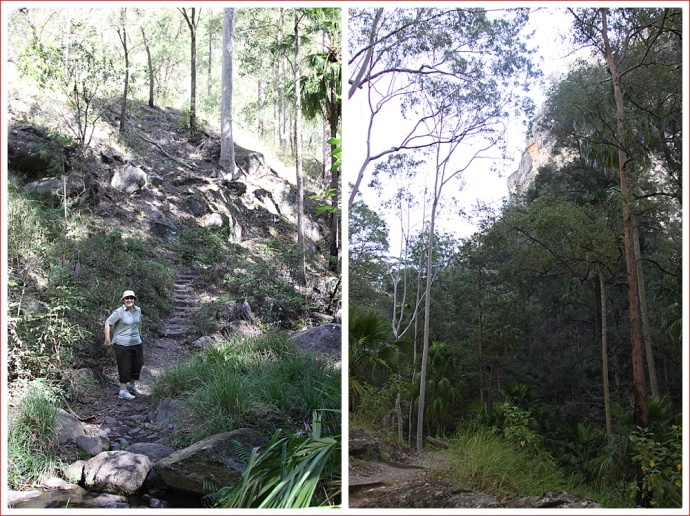 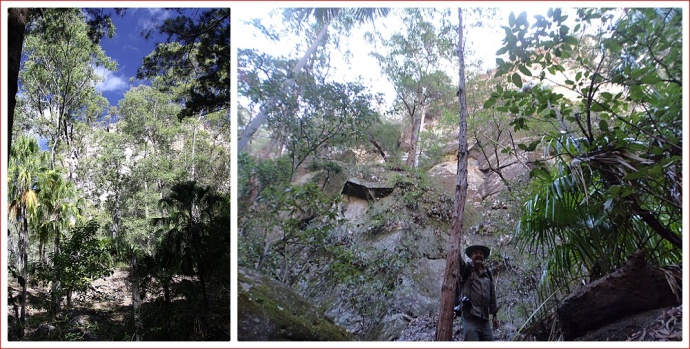 After a drink and a snack we retraced our footsteps and headed back to Ute and back to Takarakka Bush Resort and the caravan.

We had been walking for several hours so Ann whipped up a late lunch after which we sat and read for a while under the awning.

As we’re leaving tomorrow we made a start at packing up the awning and other bits and pieces, under the watchful eye of a very friendly kookaburra.

We have thoroughly enjoyed our stay at Takarakka Bush Resort at Carnarvon Gorge. This has been a great place to stay and the walks around the Gorge can only be described as spectacular. We highly recommend this place – but remember there is a gravel road in, and out.