Another chilly morning that morphed into another beautiful day. After a quick walk around the caravan park and packing up, we couldn’t resist a photo of the camp kitchen – it’s the first time we’ve seen a pizza/bread baking oven at a caravan park!

Then it was onto the Carnarvon Highway heading North. Just a couple of kilometres out of St George we came upon some stock on the road – literally. There was quite a substantial herd of cattle being driven – droved? – along the road. It makes total sense really as it saves the council having to slash the roadside, reduces fuel for bushfires, and feeds the cattle at the same time.

Cattle on the Highway near St George

Around 115 kilometres from St George we stopped at the small town of Surat for morning coffee. We stayed at Surat on our 2012 Adventure so we had a proper stop so that we could have a decent look around town. Nothing much has changed although the nearby Fisherman’s Park (Q742) free camp was a lot less busy – we couldn’t fit in last time so ended up at the caravan park.

As we were leaving Surat we couldn’t help but notice a congregation of large but empty stock trucks just out of town. They had flags signifying “Drought Stock” so we wonder if they had brought stock from the drought areas around Longreach and Winton to the more grassy pastures around Surat.

Stock Trucks on the way

From Surat it was another 80 kilometres or so to Roma where we checked into the Big Rig Tourist Park. Let’s just say that is one park that has huge potential for improvement. However, after checking out the park we think that we probably have the best site, with grass and shelter from a bottle tree, so we’re quite happy here and will be here a few days. A motorhome pulled into the site next door and we spent a very pleasant afternoon in the sun chatting with Bill and Gillian from NSW.

We have often described our mornings as “chilly” or “crisp” but this morning there was only one to describe it – bloody freezing! The weather forecast for Roma was 5 degrees and it probably got there as it was around 8 degrees when I got up for my shower. We definitely weren’t in a hurry to get out of bed this morning!

STOP PRESS – we just heard that Roma was the coldest place in Queensland today with a minimum temperature of 2 degrees!

Eventually we emerged and put the heater to warm up a bit. After breakfast it was time to bid farewell to Bill and Gillian and head into town for morning coffee. We first did a lap around town in the Ute to get a broad picture of Roma before parking and setting off on foot. Our first stop was “Drapery No 2” which is one of two drapery stores run by a slightly eccentric person who is clearly a hoarder. Stock is piled up outside the store as well as inside, to the point where you can’t even get down some aisles because they’re so jammed full of stock. That said, the shop did have some fantastic products and Ann was certainly able to find everything that she was looking for. Definitely an adventure! 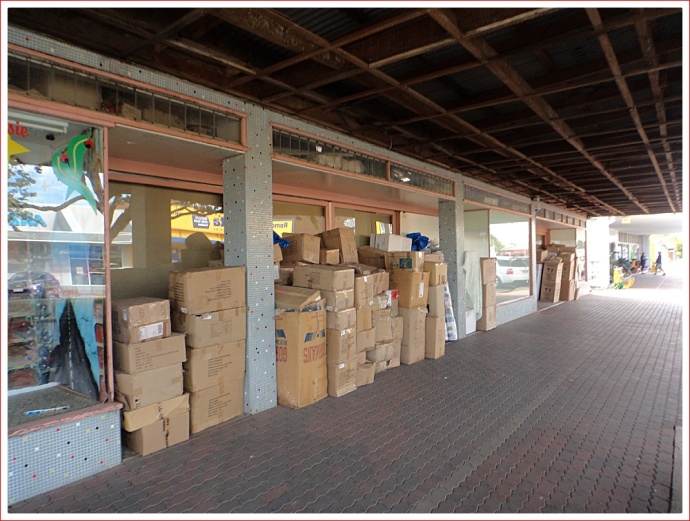 Drapers No 2 at Roma

One very distinctive aspect of Roma is all the bottle trees. There is even the heritage listed “Heroes Avenue” which celebrates the 138 local servicemen lost in WW1. Each bottle tree has a plaque commemorating one of the fallen.

Eventually we ended up at the “Bakearoma” bakery/café where we enjoyed coffee and cake – non-fattening of course despite the temptations on offer.

We later took the long way home and found Miscamble Street – some fellow adventurers will know that my middle name is Miscamble – so we couldn’t resist a photo stop.

The “Big Rig” was our next destination – this is the local tourist information centre but also showcases the role that mining and gas exploration plays in the Roma district.

Views at the Big Rig

After returning to the caravan we enjoyed a delicious lunch and then spent most of the afternoon outside reading the papers and generally doing nothing much. Sometimes we just need a day like that.

We’re now inside preparing for another cold night.