Although it was raining at about 6.00 am, by the time we were ready to go out, the weather was quite fine so we headed off to explore Cobar. First off was a long walk around the main street ending up at an interesting gift shop which also served Devonshire teas. Using a local map we then went on an exploratory trip around the outskirts of town. There is an enormous amount of history around Cobar. We were very impressed by the old Cobar station and were a bit surprised that it doesn’t seem to be used by free-campers as it would appear to be much quieter and higher in wet weather than the Cornish Rest Area, for instance. 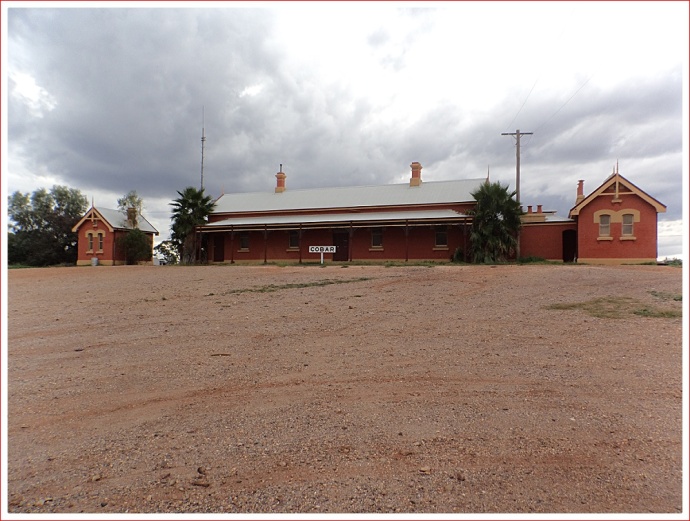 We also went for a walk around Cobar Heritage Miners Park which has been created as a memorial to the area’s miners and in particular the 1,500 miners who have died. Among the displays are a stamping battery used in the initial stages of processing output from the mines. There is actually a working model in the Heritage Centre which we visited on Friday and Ann pressed the button which then generated a huge amount of noise. The full scale version would have been deafening.

There is also a statue of “Rick” the miner and the actual Chesney No 1 Headframe from the Chesney mine opened in 1938.

At this point there were a couple of rumbles of thunder and a crack of lightning so we quickly headed back to the van, arriving back just in time! Just as we shut the door to the van the heavens opened and torrential fell, along with thunder and lightning a quite a spectacular storm that lasted several hours.

We were cosy and dry in the van but the noise was so loud we couldn’t even hear the TV.

From the comfort of our van we watched many wet and weary travellers seek refuge at the caravan park until very late in the evening. We suspect that the free camps in the area were washed out. Even the concrete slab we parked on was covered by the red mud runoff from water flowing through the park.

Muddy Concrete Slab Under the Caravan after the Storm

After more rain during the night and waking to a cold and foggy morning we decided to stay put rather than chance travelling in another storm. I went up to the office to extend our stay and I mentioned that we had been here at the same time two years ago and that the rodeo was cancelled because of the rain. The girl told me that she thought that they had moved the rodeo to September because the rodeo had to be cancelled three years in a row. I think that we’ll try a different time of year to visit Cobar next time.

By lunchtime the weather had cleared so we thought that we would venture out to enjoy a nice Sunday Roast at the Great Western Hotel. The hotel was built in 1898 and the verandah, which stretches just over 100 metres, is reportedly longest iron lace verandah in the southern hemisphere. 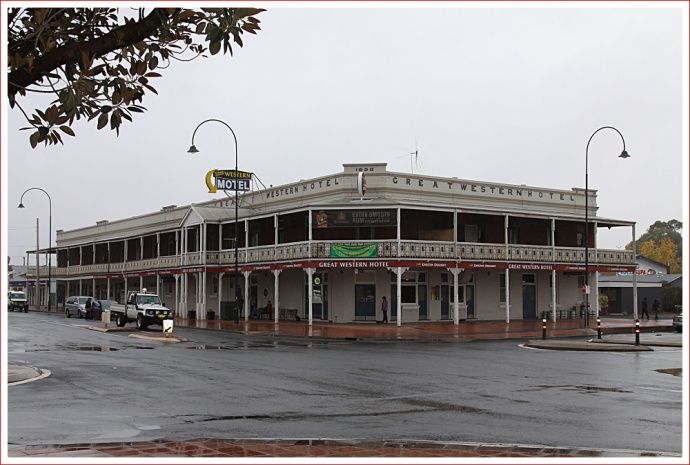 Unfortunately while the pub was open it wasn’t serving meals today so we headed off to the Cobar Bowling & Golf Club where we didn’t find a Sunday Roast but we did enjoy a delicious Thai meal instead.

As the weather was closing in and getting very dark we retreated back to the caravan park for the day.

We’re all packed up and ready to leave in the morning in search of warmer and dryer weather!