The weather Gods were not smiling on us today!

The day started well enough with kookaburras waking us at about 6.00 am. We packed up, hitched up and were on our way quite early.

It had rained overnight and it was a bit cooler with an overcast sky, so we started off in jeans and t-shirt instead of the shorts we had been wearing for the last few months.   Before long, however, the overcast sky had turned to drizzle and by the time we reached Dubbo it was raining off and on.

Morning coffee was at a rest stop just south of Dubbo, and in true caravanner style we put on our “fashionable” polar-fleece jackets, as it was getting colder.

We would have liked to have stopped at Peak Hill for a look around but the weather was against us so we continued on to what was to be the highlight of the day – The Dish at Parkes. Appropriately, The Dish, or more correctly the Australian Telescope National Facility – Parkes Observatory is located in Telescope Road, and there is plenty of parking space for caravans, and for fifth wheelers.

Turn Here for The Dish

Ann at The Dish

Shorty at The Dish

This is a tremendously interesting place to visit, and it would have been even better on a fine day as there are outside activities.  Never the less, we started off with some short 3D movies about Mars, astronomy and the Parkes facility.  The 3D glasses were ever so fashionable and the 3D effects were fantastic.  Most of the films were actually made at Swinburne Uni and were very informative.

After the introductory films we had a good look around the display area and shop where they have loads of interesting stuff.  There are some hands on/interactive things to do as well.

Then it was time for lunch in the Dish Café.  The menu was full of celestial named dishes, but we both thoroughly enjoyed our freshly baked Beef with Red Wine Pies.  The coffee, made with Byron Bay coffee beans was as good as the Byron Bay coffees we had enjoyed at Hervey Bay!

Lunch at The Dish Cafe

After a quick run through the rain back to the fiver, we hit the highway.

Trailblazer in the Rain at The Dish

Interestingly, from Parkes the GPS took us off the Newell Highway and down a number of Class B and C roads through small towns like Eugowra and Gooloogong.  The trade off in road standard was that there was hardly any traffic or trucks, especially compared to the Newell.

Finally we made it to Cowra Van Park where Craig, the manager, showed us to our site.  Last time we were here we parked on the grass but this time he was making an effort to park everyone on slabs as it really is so wet here.  Set up was super quick and we are now warm and comfortable, and will happily stay here until the weather breaks. 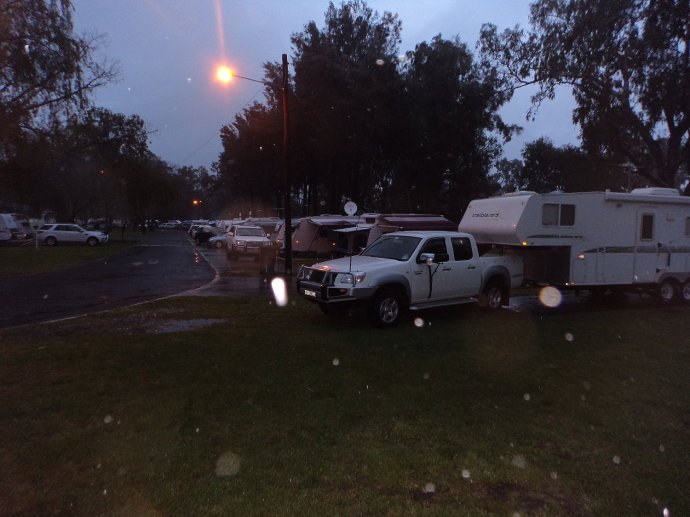 Settled in at Cowra Van Park