After some quite heavy rain overnight, the morning quickly warmed up and we were able to get fully packed and ready to go quite early.

Today was a driving day, and we stayed on Motorways pretty well all the way from Maroochydore to Ipswich.  Although the roads were great and we made great time, it did limit the opportunity for coffee and other breaks.  We also had to battle the GPS which wanted to take us one way but following advice from Downunda and Faye, we wanted to go another.  Eventually we got to the Gateway Bridge which is quite spectacular.

Our much delayed coffee break was at Fassifern Memorial Reserve in the company of several other vanners.

From Fassifern we experienced some quite steep roads and spectacular views as we went through the Great Dividing Range and the Main Range National Park and Gondwana Rainforests of Australia World Heritage Area. 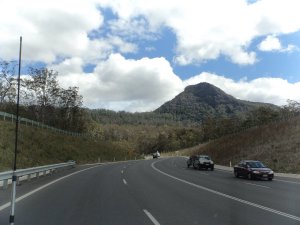 We finally escaped from the Motorways around Warwick, which gave us a bit more flexibility to stop.  As we were getting a bit hungry by now Ann got a couple of delicious pies from Percy’s Pies in Warwick which we ate at the Australiana Park, Warwick.

At Warwick we got onto the New England Highway and eventually made our way to a free camp at the Jim Mitchell Park in Dalveen.  This is a nice spot with a toilet and a dump point, and a nearby shop.  We had a good chat with our next door neighbours, also from Victoria, and said hello to people from most of the other half a dozen vans which had pulled up for the night.  This is a nice friendly spot for an overnighter.

We still weren’t totally happy with the rate at which the van batteries were losing power while we were driving so we got out the generator for the first time to charge the batteries.  After a bit of mucking around I got things sorted and the batteries were fully charged in no time.  A chat to another vanner here also gave me an idea as to what might be contributing to our flat battery situation so I’ve made a few changes and hopefully we’ll see an improvement from now on.

We’re still living the dream and still don’t know when we’ll be back home.