After a mild night, Saturday morning started off quite fine so we headed off to the Broome Courthouse Markets, set in a large tropical garden area.  What an amazing mix of stalls and individuals!  Clothing, handcrafts, artwork, more clothing, charity stalls, local tour operators and so much more.  Then of course there were plenty of choices when it came to food, including many Asian styles, local organic produce, and even a considerable choice of coffees.  We succumbed to some incredible Indonesian treats and some Kimberley Coffee Company coffees.  And there were buskers and musicians of all types, including banjo players, country and western guitarists, flautists, and more. 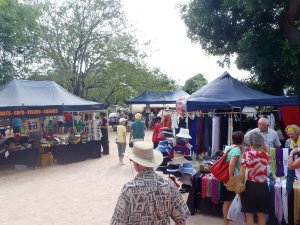 We stayed at the market for quite some time before heading back to the fiver for lunch.  Then, as the wind was increasing a bit, we decided to hang around the caravan park and attend to some more domestic pursuits.  Ann caught up on some washing, which dried brilliantly in the wind, and then did a heap of cooking to tide us over the next few days which we anticipate will include several days of free camping.  I spent some time trying to reduce the red colour of our caravan and was at least partially successful.

During the afternoon we were visited by some fellow travellers who we had met at Port Hedland Golf Club but left a couple of days after us.  We later caught up with them for a Happy Hour (or two or three) under the awning of the fiver.

A great end to a great day!