It was cold again this morning; very cold. After hot showers we headed off to the Karalundi café for breakfast with David, CEO of the Karalundi complex, and his wife.  Karalundi started life in 1954 as an aboriginal mission, but its function and ownership has changed several times since then.  Currently it is an independent church boarding school for aboriginal children, and operates as a joint venture between the education department and the Seventh Day Adventist church, with additional support and funding from aboriginal affairs and health departments.  It is a huge place and looks after several hundred students – who were all away on a special end of term excursion to Perth this weekend.  Most of the buildings are made from rammed earth and there are plenty of solar panels and satellite dishes.  There is a huge vegetable garden and about 100 chooks free-ranging in a very productive orchard.  There are several hundred sheep and a number of llamas.  The kids receive a decent academic education plus many practical skills including cooking, growing vegies and fruit, mechanical skills, and more.  The very impressive café and caravan park are basically add-ons to the main education business at Karalundi.  Two of David’s young children had actually formed a welcome party when we arrived yesterday and had offered us a treat of raw and cooked witchetty grubs.  We politely declined.

From Karalundi we continued along the Great Northern Highway to a rest area where we stopped for morning coffee.  It was a great spot along the Gascoyne River (South Branch) and this was definitely a potential overnight free camping spot.  There was a beautiful lagoon and an abandoned mine (not totally safe I might add) and clear signs that there had been campers there overnight.  Unfortunately this great spot was spoilt by so much rubbish, bottles, and even disposable babies’ nappies. 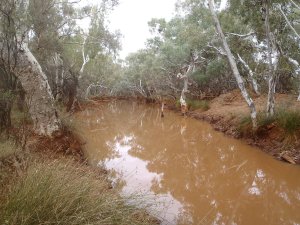 After leaving the rest area we came across a wide load on the road – a very wide load that actually occupied the entire width of the road.  It appeared to be the bucket from one of the huge mining dump trucks and despite the size and obvious weight the truck was travelling at a quite impressive rate.  There were two advance pilot vehicles and another pilot vehicle behind, all with flashing lights and a very humorous dialogue that we overheard on the CB.  We tucked in behind the wide load and were surprised that we passed two other wide load trucks which each carried half a house!  Eventually the two half houses caught up to us so we pulled off the road to let them pass.  They eventually passed the very wide load truck as well, and headed off at a very fast pace.

We stopped for fuel at Kumarina Roadhouse (diesel was 196.9 per litre) and caught up with the very wide load truck which had stopped there for lunch.  As we couldn’t find a suitable parking spot for us to stop for lunch, we continued along the highway to the next rest stop where we planned to have a quick stop and then head off again in front of the very wide truck.  Murphy’s Law would say that we couldn’t be that lucky and we weren’t; so we stopped for a much more comfortable lunch stop and let the truck head on up the highway. 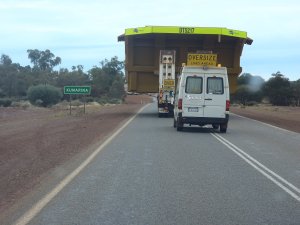 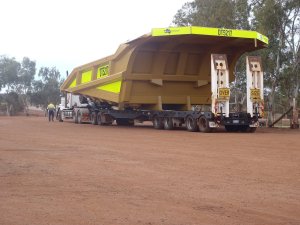 After lunch we continued up the Great Northern Highway past more dead cattle on the road, and then it started to rain.  We drove the last 50 kms into the mining town of Newman in the rain, which fortunately eased off as we arrived at the Kalgan’s Rest caravan park.  Other than caravans, this place has a huge number of other accommodation options, mainly for miners.  Our neighbours from Karalundi soon pulled up beside us. 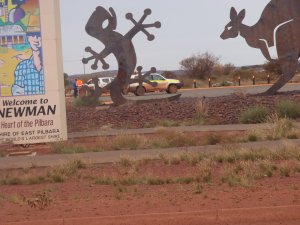 At the shop to buy ice-creams as a treat after a reasonably long day, we were told that the weather forecast for tomorrow was for heavy rain, so we may be here for longer than we had planned.